As we previously reported, Josh Duggar was arrested for the possession of child sexual abuse content. He had a detention hearing and is now living with a pastor and his wife. Josh’s trial is in July. For now, he must stay away from children, except for his own with his wife Anna’s supervision. So, he can’t see his siblings or the rest of the Duggar family. He’s having to adhere to strict conditions, including wearing a GPS tracking device, not accessing the internet, and only leaving the house for approved reasons. You can read more about the conditions he was released on here.

Since his arrest, TLC and the rest of the family have issued a handful of statements. Now, fans are saying that they don’t think these comments made by the family are sufficient.

On social media, a few members of the family have shared statements, while others have decided to stay silent. Jim Bob and Michelle Duggar shared a post on their blog, and it reads, “We appreciate your continued prayers for our family at this time. The accusations brought against Joshua today are very serious. It is our prayer that the truth, no matter what it is, will come to light, and that this will all be resolved in a timely manner. We love Josh and Anna and continue to pray for their family.”

Most of the Duggar kids’ statements followed a similar pattern and stayed pretty neutral.

TLC shared a statement as well, revealing that they are “saddened” by this news. Jacob Roloff, formerly of Little People, Big World, had a negative response to TLC’s statement as well and called it “disappointing.” 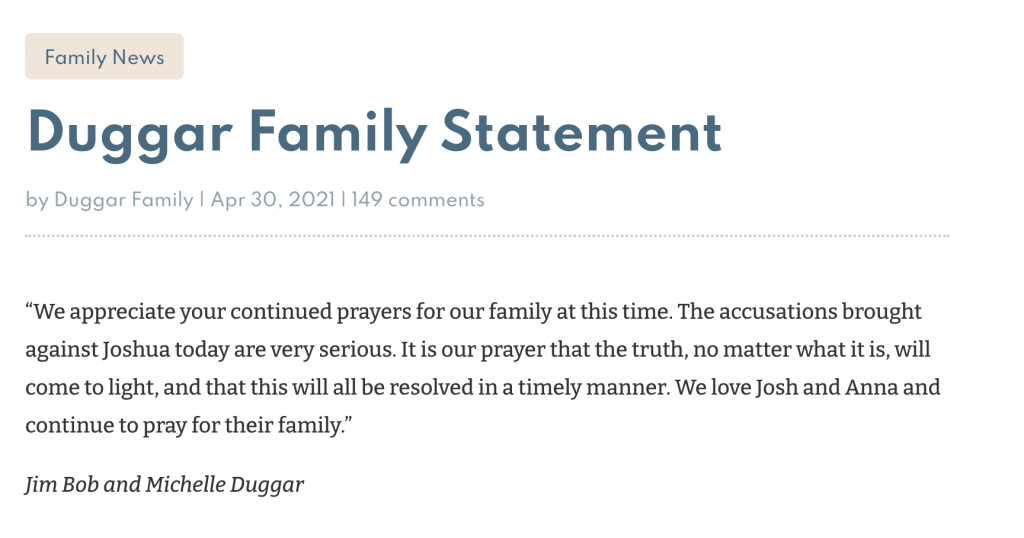 Fans think something is missing

On social media, the Duggar family has limited some of their comments. This helps to filter out some of the negative comments they are receiving, but a handful of them are still able to get through. In the comments section of one of Joy Duggar’s recent posts, a fan comments, “A lovely family..where’s the outrage at other people’s children being abused for the entertainment of sick men like your brothers?? I would hope you are a little more than ‘saddened’??? So disgusted by the generic responses from all of your family, saddened just won’t cut it this time.”

Others have weighed in and said that the comments made by the family don’t seem to match the severity of the charges against Josh. It seems that fans were hoping the family would speak out against child abuse and condemn Josh’s behaviors more heavily.

So, what do you think of the family’s responses to Josh Duggar’s recent arrest and allegations? Do you think they should have said something different? Let us know in the comments below.

For the latest updates on the Duggar family and your other favorite TLC stars, check back with TV Shows Ace.