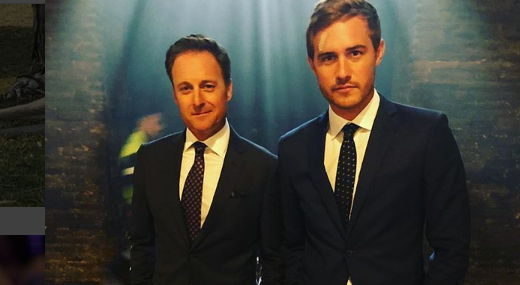 Chris Harrison spills the gossip about the latest twist on The Bachelor.

On Monday’s episode, Peter Weber‘s final three, Hannah Ann Sluss, Madison Prewett, and Victoria Fuller, learned some shocking news. The women learned they were going to have to live together during the Fantasy Suite dates. So, after spending a romantic night with Weber, they return back to the hotel. Here, they’ll be greeted by the other ladies who had possibly just had an intimate night with Peter as well.

Chris Harrison Created A Difficult Situation For The Cast

“There are times when, no matter how great you are, but you can’t get out of your own way, and that’s why you are single,” Harrison said.

He went on to say that Peter struggles with making decisions. So, the producers have to make some decisions to get the ball rolling. He explained that producers will sometimes have to force their cast members into uncomfortable zones that will then force them into making a decision. Chris says this is sometimes for the star and sometimes it’s for the ladies and guys.

The host called this situation “extraordinary.” Prewett had also taken her time making a decision until she gave Weber an ultimatum. She told Peter that if he’d slept with Fuller or Sluss, she would leave him.

So, Chris says the purpose of making the ladies live together was to force a situation that had to happen. And this situation had to happen during the Fantasy Suites. “If we get to proposal week, then this guy is really screwed and there’s no chance this works. We got to figure this out, and there is really only one way to do it,” Chris Harrison shared.

Chris admitted this was tough love and definitely awkward, but there were conversations that needed to happen. He’s not sure if a situation like this has ever been used in the history of the show. He believes that there was a double standard standing in the way. This situation provided everyone with the perspectives of the ladies on the show.

“We needed Madison to face Victoria and Hannah Ann and have them express their emotions on this,” he added. “Because, again, it’s just this guy and his perspective, and I don’t know if that’s the greatest thing right now.”

Tonight this season of #TheBachelor truly begins. This is going to be a wild ride

According to People, Chris Harrison’s wishes were granted during that episode. Awkward moments were definitely shared as the women lived together in Gold Coast, Australia.

It was clear Prewett felt nervous about the possibility of Weber sleeping with the other ladies. It didn’t help when Sluss returned from her overnight with Weber to greet her roommates with a big smile on her face.

Prewett and Weber shared a date of scaling the tallest building in the Gold Coast. Afterward, Prewett finally informed Weber about her virginity.

The conversation did not go over well. When Madison revealed her discomfort, Peter revealed some unsettling news. She told him she was not comfortable with him sleeping with the other ladies before the potential proposal. Peter admitted he had been “intimate” on the Fantasy Suite dates, but he left the details unknown.

Despite Peter Weber’s tearful efforts for Madison to stay, she had to excuse herself. She told him she felt very hurt and she cannot change who she is.

Chris Harrison’s stunt was a success and made history for Bachelor Nation.