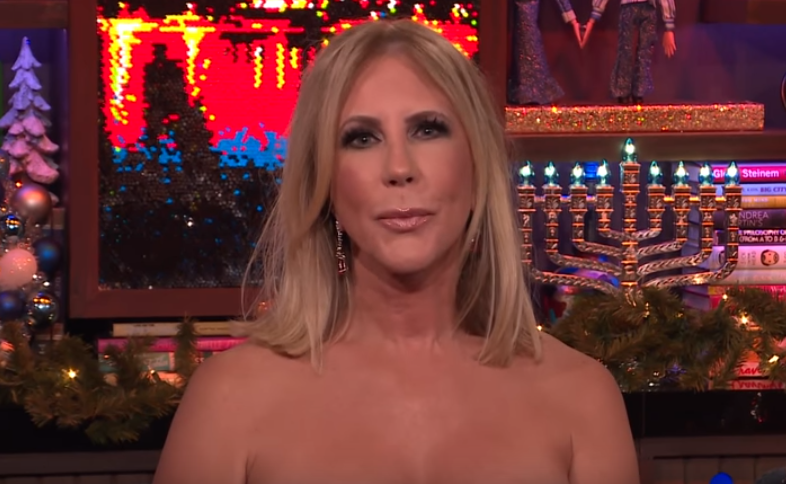 Vicki Gunvalson wants a Real Housewives of Orange County spinoff about her life. But, it has also been reported that she’s been offered a friend role for next season.

Is Vicki Going To Take A Demotion On The Show Or Leave All Together?

Earlier this month it was reported that the ladies of RHOC had received their offer letters for next season. These letters revealed who remains and who’s cut from the next season of the hit Bravo show.

If Vicki, 57, chooses to accept the offer, she will be demoted to “friend” status again.

It’s been reported that she has yet to decide if she’s going to accept this friend role again. But, there is still time for her to accept or deny this offer from Bravo.

Vicki posted a photo on Instagram on January 20th, it was a photo of herself, her brother, and her sister, vacationing in Puerto Vallarta, Mexico. A fan left a comment with a suggestion to create a spinoff about Vicki’s family and business.

Another follower replied, agreeing with Vicki, “Agree, love you, Vicki. Time to move on from those ladies. You have a great future filled with love. You don’t need that nastiness in your life.” This got Vicki even more excited about the idea.

But, after Bravo limited her camera time during last season, it’s doubtful the show will come to fruition. It was reported last year that the network is trying to garner a younger audience.

Vicki Gunvalson Will Always Have a Story

Last year, Gunvalson went from being a main cast member since the series premiere in 2006, to just a friend of the show.

Some have predicted that she is going to continue to appear on the show as a friend for future seasons since she is a household name. But her becoming a main cast member again is very unlikely.

According to RadarOnline, the offer for Vicki Gunvalson to be a friend again was take it or leave it.

But most of her co-stars are probably delighted with their own deals for the upcoming season.

Tamra Judge, Shannon Beador, Emily Simpson, Braunwyn Windham-Burke, and Kelly Dodd are all confirmed and picked up for the next season of RHOC.

During all the new season drama, Vicki took a week long New Year’s cruise with her fiance Steve Lodge. She followed that up with previously mentioned trip to Mexico.

It has been said that Vicki promised to get engaged then marry Steve in an attempt to save her RHOC job. They are engaged and when Steve proposed, Vicki showed off her engagement ring on social media.

But, it’s up to her now, she will decide if she’s going to accept a reduced role again or leave RHOC for good, All while possibly shooting for a spin off.

As of January 3rd, Vicki had said she didn’t know if she was going to return for the 15th season.

One thing everyone knows for sure, Vicki Gunvalson believes she is worthy of her own show. She declared in 2013, “I don’t believe I  will never not have a story. I’m Vicki Gunvalson. I’m not boring.”