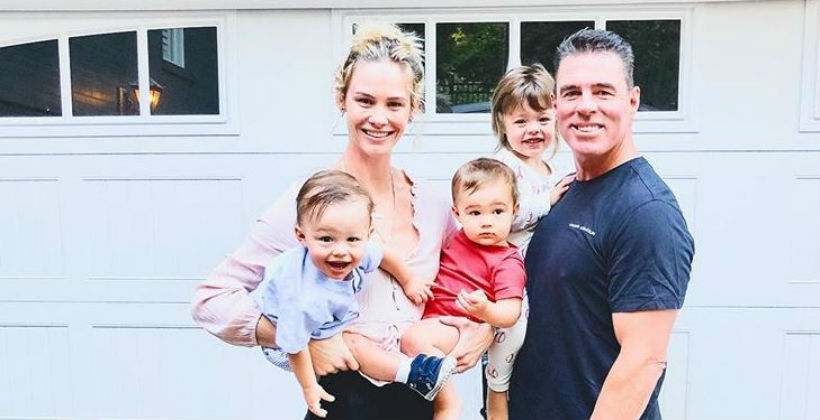 It looks like another Real Housewives marriage is over. After five years together, Jim Edmonds filed for a divorce from Meghan King Edmonds. The announcement comes just one day after the couple celebrated their five year anniversary.

Meghan and Jim have had many problems in their marriage

The couple had been struggling to keep their marriage afloat and it looks like the tension was finally too much. US Weekly shared the news that Jim had filed for divorce today, October 25. Multiple sources confirmed to the news site that Meghan and Jim’s marriage is over.

The source shared that Meghan and Jim’s most recent argument was so intense the police were called out. They said, “Meghan and Jim have been fighting. The latest fight began when he went to a recent hockey game and she began interrogating him about who he went with.”

The interrogating is because Jim admitted to Meghan that he had been sending explicit texts to another woman. He claims there was no physical contact between him and the other woman. Regardless, Meghan was having a hard time trusting Jim after his confession.

According to E!News, just yesterday Meghan was commenting that it was hard trying to rebuild trust with Jim. Meghan said, “We’re just still working it day by day. I think after such a breach of trust, it’s so hard to rebuild from there, especially [with] so many distractions, like our son’s health problems and two other little babies as well. And so to focus on the two of us as a couple, is really hard.”

The couple has three children together so of course they would want to try and make their marriage work. Meghan said they were attending counseling together. She said, “I think going to therapy is huge because I think a lot of men don’t like that. So that’s been really big for me. And then, like little things to work on [as well]. Let’s say, I like things in the calendar and he doesn’t, [him] trying to put things in the calendar more. That’s not going to make or break a marriage, but little things add [up], like small acts of kindness.”

The couple’s split comes just 4 months after Jim confessed he had been texting another woman. The former pro baseball player said, “I engaged in an inappropriate conversation with this person.  At no time was there any type of relationship or physical contact. Absolutely none. This is someone trying to profit from my name. I am aware she has done this to others in the past.”

Meghan commented on the texting affair and said, “Marriage is hard, we’ve been through our ups and downs, I’ve talked about it openly. A relationship takes two but it doesn’t take two to cheat. I did nothing wrong, I don’t deserve this. I did nothing except be pregnant with our twins and try to have a healthy pregnancy. So what is so broken in him to propel him to do this to me? To us? It wasn’t one mistake, one lapse in judgement. I saw the texts – each one represents his decision to throw our marriage in the trash. Why did he self-sabotage? And who sends nudies? Doesn’t everyone know better than this in 2019? What drives someone to self-destruct in such a way?”

It looks like they are giving up and moving on. Check back with TV Shows Ace as more developments arise.

WAIT! Is Jacob Roloff’s Wife Pregnant With Couple’s First Baby?
Adam Busby Shares Photo As He Takes The Top Off
Is Lifetime’s ‘Secrets Of A Marine’s Wife’ Based On A True Story?
‘Bachelor In Paradise’: First Former Lead Heads To The Beach Looking For Love
Sister Wives Star Mykelti Returns To Her Original Roots