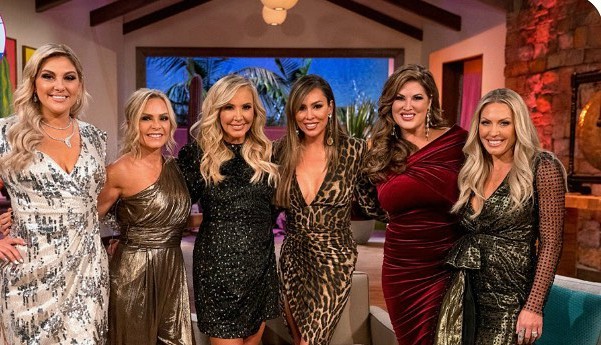 A tense Season 14 of The Real Housewives of Orange County wrapped up with a cast reunion in December. Bravo Exec, Andy Cohen, promised a cast shakeup for Season 15. However, he denies new Radar Online reports about who will be back and who won’t.

Sources told Radar Online that everyone has a new contract except for one cast member. Gina Kirschenheiter allegedly hasn’t received a contract inviting her back.

While Tamra Judge allegedly received a new contract, it was a close call. Reportedly, the network was on the fence about asking the controversial star back.

As fans know, the other women consider Tamra a pot-stirrer. She spread vile rumors about her co-stars. The network felt the show might get “stale” and “boring” if the same people returned.

Additionally, RHOC OG Vicki Gunvalson may be back part-time if she accepts. She clearly stated at BravoCon that she wouldn’t return in a part-time role. Vicki had a meltdown at the Season 14 reunion over her reduced role.

At one point, she screamed at her co-stars to get off her show. However, if Radar Online is correct, neither of the co-stars she confronted will be leaving.

Kelly and Braunwyn Windham-Burke took the brunt of Vicki’s rage for their questionable behavior. Braunwyn especially earned Vicki’s ire by making out with Tamra. However, Vicki didn’t call Tamra out for her part in the make-out session.

Braunwyn set internet gossip ablaze by posting camera crews setting up in her driveway. TV Shows Ace reports that the RHOC newbie fanned the flames by thanking Kelly for spending the day with her.

Fans took this as an indication that the pair kept their reality show jobs for Season 15. Shortly after, a Radar Online story shared everyone was asked back except Gina.

According to TV Shows Ace, Andy Cohen addressed the casting on his Radio Andy radio show. The exec noted the contracts were supposed to be sent out during the first week of January. However, the network postponed the decision for a few weeks, he said.

Hours after the Radar Online story about the Season 15 cast was posted, Andy responded. He posted on Twitter, asking who believes the gossip site. He also pointed out that contracts had not been sent out yet.

Why is anyone believing Radar Online? No contracts have even gone out.

The Real Housewives of Beverly Hills star Lisa Vanderpump is always accused of leaking stories to the gossip site. She allegedly has a contact at Radar Online. Many fans pointed out that fact to Andy.

Because your entire cast did last season of RHOBH didn't they ? Actually they pretended to believe it to have the leverage to bully a cast member

OMG!!! Are Zach & Tori Roloff Leaving ‘Little People, Big World’?!
‘Below Deck Sailing Yacht’: Dani Sets The Paternity Rumors Straight
Lauren Burnham Gives Update On Daughter, Shares Huge Surprise For Arie
‘Renovation Island’ Resort from HGTV: How Do You Visit?
‘Bold And The Beautiful’ Joe LoCicero Is Back As Vinny Walker But How?