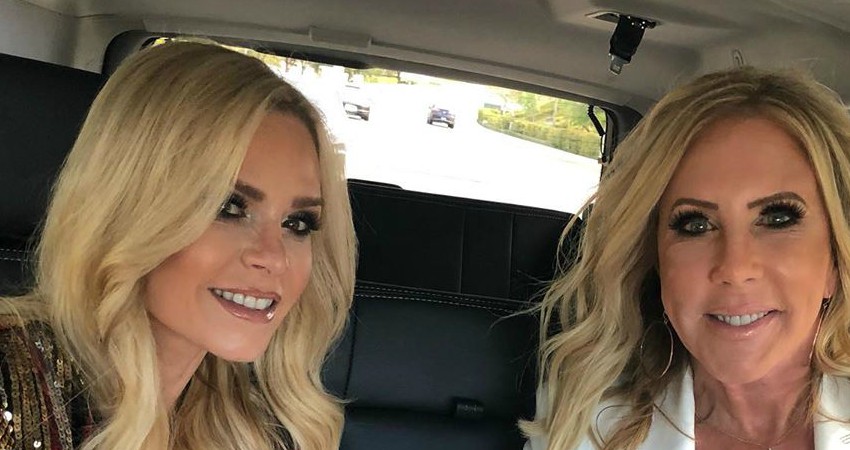 The Real Housewives of Orange County’s future is uncertain. While the show will return for Season 15, it’s up in the air which cast members will return. Andy Cohen recently teased a cast shake-up.

However, TV Shows Ace reports that Andy quickly shot down rumors that the cast was chosen. According to Andy, the network is still deciding.

The Real Housewives of Orange County just wrapped up Season 14 in December. All of the cast members may be let go before the new season.

Kelly Dodd and Braunwyn Windham-Burke sparked speculation of returning. Braunwyn posted a photo to her Instagram account of camera crews setting up on her property. She then added another photo thanking co-star Kelly Dodd for spending the day with her.

Internet fans immediately pounced with the assumption that the two were filming for Season 15. Neither star confirmed or denied it. However, both are listed as returning stars on the casting breakdown Andy Cohen shut down.

However, Emily Simpson is supposedly coming back but her birthday wasn’t filmed for the show. Things that make you go hmmm.

As TV Shows Ace reports, Tamra caused a frenzy on social media recently. Fans thought she got fired because all traces of RHOC were removed from her social media.

However, Tamra responded to a fan’s inquiry by saying people read into things. She then put the orange emoji and references back onto her profile.

Now she is stoking more fan speculation with her recent Instagram story. While attending a motocross race, fans spotted cameras filming Tamra. They immediately assumed the film crew was from Bravo, filming Season 15.

Tamra seemingly confirmed this with a thumbs-up emoji.

RHOC: Tamra Judge confirms her return to The Real Housewives of Orange County for the shows upcoming 15th season as she posted Instagram Stories with a camera crew at Supercross in Anaheim! Are you excited to see Tamra back? RHOC returns mid-2020. #realhousewives #rhoc

RHOC Star Says Vicki Gunvalson ‘Not On My F***ing Cast’

There certainly isn’t any love lost between newbie Braunwyn and RHOC original star Vicki Gunvalson. While Vicki appeared on Season 14, it was in a reduced role. Vicki took exception to her part-time status during the reunion episodes. She went off the rails and yelled at Kelly and Braunwyn to “Get off my f***ing show!”

At BravoCon, Vicki shocked fans by saying she is done with the show unless she’s given a full-time role.

A recent appearance on the podcast, Watch What Crappens, by Braunwyn has fans wondering if Vicki quit or was fired. Reality Blurb reports that things look bleak for Vicki’s return.

It all started when the mom of seven said she gets along with all of her co-stars. An audience member shouted, “except for Vicki!,” referencing Vicki’s disdain for Braunwyn.

Braunwyn’s response could mean the end of Vicki’s RHOC tenure. She retorted, “[Vicki’s] not on my f**king cast!”

It’s possible that the newcomer was riffing on Vicki’s reunion appearance. However, earlier reports indicate that Vicki was only offered a part-time, reduced role again for Season 15. The role she has said several times she won’t accept.

Once casting is figured out, The Real Housewives of Orange County will return to Bravo in late 2020. Maybe with Vicki, maybe not. Check back with TV Shows Ace for updates.