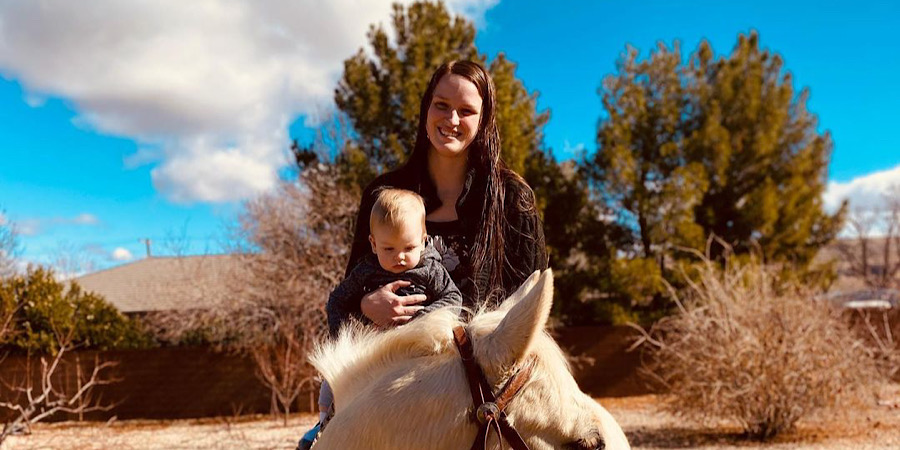 Last week on Seeking Sister Wife, the Merrifields spent their last night with Roberta. Not knowing how long the K1 process will take, Garrick broke down in tears. He already misses his future sister wife and she has not even gone back to Brazil yet. Dannielle can’t help but wonder if she is enough for him when they return home. The Winders are adjusting to life with a newborn but the wives ask about Kimberley. She was someone they were courting before the pandemic. Unfortunately, her trip was put on hold but they’d like to bring her out again. Colton is unsure if the time is right yet he knows it is in God’s hands.

Kaleh had been quarantined away from the Clarks and eventually parted ways with them. Finally, Chrissy and her daughters made their way to California to be with the Snowdens right before the international travel ban. Can two sister wives, five kids, Ashley and Dimitri co-exist in one home during a lockdown? Highly unlikely.

Sidian and Tosha Meet a Potential On Seeking Sister Wife

They were trying to meet a woman the old-fashioned way but COVID hit and derailed that. So, Sidian and Tosha resorted to online dating and met Alexandra who is thirty. She is super into nature and adventure, clicking with Sidian right away. They get along and now it is time for her to see if she can connect with Tosha, as well. Sidian decides to see if she is online so Tosha can chat with her so he video calls her. She happens to be road-tripping and picks up from the forest.

Her travel buddies are girls and they refer to one another as sisters so she is looking for that bond. She does acknowledge it would take some time to adjust being that this is her first plural relationship. However, she and Sidian have so much in common and love so many of the same things. They do ask her about kids and she does not appear to want any of her own due to her lifestyle. She does say she would work hard to be a great stepmother.

The Joneses mute Alexandra briefly and decide he should ask her out. She says it would be really interesting to get to know them better in person. Tosha is only leery about the children aspect and how she does not want children. They do not know if this lifestyle is really for Alexandra. Time will tell.

Are The Snowdens Surviving?

The day after Chrissy arrived, California was shut down due to COVID. Three months later, the production crew was able to return to see how the family of nine handled life. The children had a great time together and the women initially got along. There was no intimacy at first but it was decided to take it to the next level so Chrissy and Tayler did the 21-day alkaline diet.

Dimitri has now been intimate with all of the women. It all worked out great at first but soon, everything changed. Dimitri’s business began to struggle and he was losing money and it was a horrible time to do so. He now had two extra wives and more children. To make ends meet, he took on odd jobs and his new wives felt the pressure. Tayler and Chrissy are seen chatting about how it all felt different. The biggest change for the family, aside from financials, was Tayler’s retreating.

She had been a single woman before and now she would just go into her room and hide from everyone. It is also hard for her to be an instant mom to five children. Chrissy notes that Ashley and Tayler clash almost every single day. On the screen, it shows Tayler went to go visit her family in Texas a few weeks later. They are awaiting her return…

Kimberley is finally on her way to visit the Winder family. Sophie and Tami are checking in on her after her first flight. Everyone has been COVID test so they know they are safe and she will be staying at a hotel. She will be in town for two days and they have limited time but it is important for Colton to connect with her. It is almost time for Kimberely to come by so Colton is asking her ETA. Again, he jokes about only having one face for every emotion. He is adamant the wives do not leave her alone with him.

There will be no kissing or anything of the sort until there is a commitment. He says it is really about the women vibing with her. She arrives and Colton says she is easy to talk to and they get along. As for being attracted to her, he says he is not there yet. However, he does admit she is attractive. Unfortunately, he has to work so they will be having a girl’s day until he comes home.

Everything is fine with Chrissy but Tayler is gone and they do not know when she is coming back. Ashley admits they butted heads and it was a struggle. It is very important for Dimitri to get his relationship with Tayler back on track. Six weeks ago, she said she was going to Texas to see her mom and has not returned. Since she left, Chrissy noticed there is a shift in the energy. There is less clashing but she does miss the connection she had with her friend.

Tayler agreed to video chat with Dimitri and her vibe is much more positive. Though she does miss the Snowdens and Chrissy, her business is booming and she feels alive again. She cannot imagine giving up this life to go back into quarantine and a more toxic situation. It’s a catch because he misses her but it has calmed down. Seems Dimitri wants all his wives together and does not appreciate the abruptness.

It does not appear Tayler is going to be returning when she is thriving out in Texas. Dimitri wishes she had come to them in person and said she was not feeling but he says he will get her stuff to her. He goes to tell the family they have mutually ended the relationship. Ashley knew this was coming. Chrissy admits Tayler wanted all the attention and took Dimitri to herself and that was a hindrance. Ashley wishes she had trusted her gut with Tayler because it was off.

The Clarks Get Their Groove Back

It’s been a few weeks since Kaleh left the family so Jarod and Vanessa have attempted to heal. They know the right person will come along and she may have just pulled up. Emily is in a car club with Jarod and they have known each other for years. She goes to him when she needs help with her car and is recently single. He notes he is, too but has to explain how it all works. Vanessa shows up and asks if they are thirsty and would like some beverages.

Jarod soon explains their lifestyle which he assumed Emily was already aware of. She is very inquisitive and Jarod is sensing there is an interest on Emily’s behalf. Emily may want to explore this life with the Clarks and asks how it is possible. He is open to pursuing something with Emily and asks if she would like to go out with him and Vanessa. Because the Clarks know Emily, this could be a good fit.

Next time on Seeking Sister Wife, Emily goes on her first date with Clarks but she may be more than they bargained for. The Winders explain to Kimberley how courtship works while Sidian has his first date with Alexandra. Garrick and Dannielle bring up him and Roberta being intimate in Mexico. Does not look like Dannielle is letting that go anytime soon. Don’t miss new episodes every Monday on TLC and discovery+.