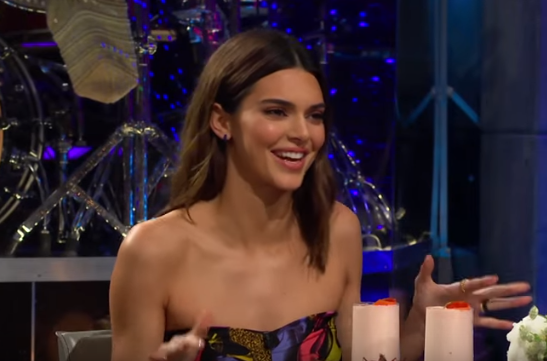 Rob Kardashian may not have been in first place on Dancing With the Stars, but he is in a more important competition. During her appearance on The Late, Late Show with James Corden, Kendall Jenner said that he was the best parent of all her siblings. She placed him above his sisters Kourtney Kardashian, Kim Kardashian West, Khloe Kardashian, and Kylie Jenner.

“I’d say that Rob is number one,” she told The Late, Late Show’s guest host, Harry Styles, her ex. She noted that Rob has a close relationship with his 2-year-old daughter, Dream Renee. “He’s so good to his daughter!”

Though she said Rob was the best, Kendall expressed how all of her siblings are “amazing” parents to their children. “They actually all are amazing,” Kendall said. “They really are. Like, can’t make it up! They are, I swear!”

Jenner and Styles were playing The Late, Late Show‘s game “Spill Your Guts or Fill Your Guts.” If Kendall didn’t spill the gossip, she was going to have to drink 1,000-year-old egg nog. So, Kendall ranked the rest of her siblings based on their parenting skills.

“It would be like, Khloe, Kim, Kylie, Kourtney,” she said, laughing in embarrassment. “They’re all amazing!”

All together, Kendall has a total of 10 nieces and nephews. Previously mentioned Dream, who’s parents are Rob and his ex, Blac Chyna.

Kim and husband, Kanye West have four children. Two daughters, North who is six, and Chicago who is one. As well as two sons, Saint, four-years-old and Psalm who is seven months old.

Kourtney and her ex-husband, Scott Disick co-parent three children. Penelope, a seven-year-old, Mason, a nine-year-old, and Reign, a four-year-old.

Kylie and Khloe each only have one child at the moment, both girls. Khloe is a mother to one-year-old True, with pro basketball player, Tristan Thompson. Khloe and Tristan recently rekindled their love after multiple cheating scandals on Thompson’s part. Kylie’s daughter Stormi, whose father is rapper Travis Scott, will be two in February.

Kendall Jenner is the only sibling left without children, but she’s in no rush to start a family anytime soon. According to People, back in March, she made it clear that being an aunt was enough for her for the time being.

“I have moments when I’m like, ‘Do I have baby fever? Do I want a baby right now?’ But I don’t, I don’t,” she said on The Ellen DeGeneres Show. “I’m good. I can wait for a little while longer.”

“But it’s awesome because I have all these little babies to play with, so I can play with them and then just give them back,” Kendall added jokingly. “They’re all really cute.”

Kendall enjoys poking fun at herself being the only left without children. Back in November, she made a joke about her and Fai Khadra starting a family of their own. Many of her family members fully supported this idea.

Why Is Tammy Slaton ALWAYS Wearing The Same Mask On Her Chin?!
‘The Young and the Restless’ Spoilers May 10-14: Lives At A Crossroads
Did ‘Below Deck’ Alum Kate Chastain Go Under The Knife?
Does Emmanuel Acho Want To Permanently Host ‘The Bachelor’?
Todd Chrisley Shares The Truth In Marrying Someone ‘Just Like Your Mom’