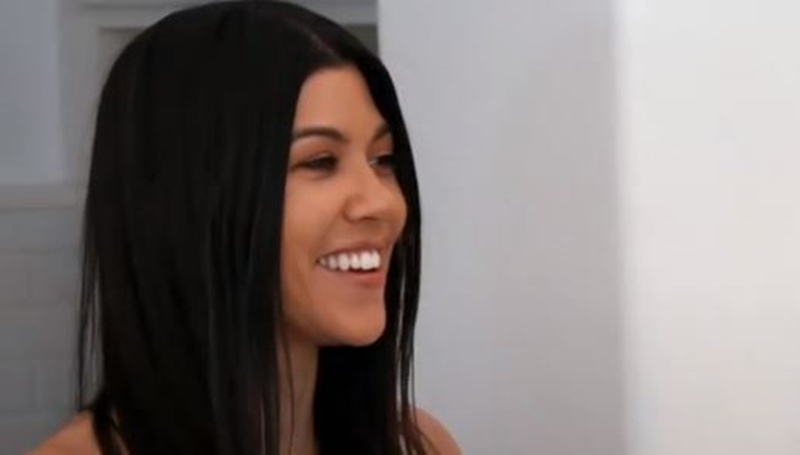 KUWTK got a preview of Sunday’s episode on Instagram. In it, we see that Kourtney Kardashian sports an obvious hickey on her neck. And, Kim and sister Khloe are not impressed. In fact, they interrogate her about it. Fans think that for a forty-year-old, Kourtney’s acting more like her little half-sister Kendall than a grown-up mom.

TV Shows Ace reported that last year, Scott Disick spent Thanksgiving with Kourtney Kardashian instead of with his girl,  Sofia Richie. That’s a year back, but perhaps that contributed to some fans thinking maybe Kourtney got her hickey from him. One fan said on the episode preview, “it was prob scott.” But, when someone pointed out the fact he’s with Sofia Richie, the fan noted, “that don’t mean nothing 😂.” Well, we don’t know who gave her the hickey, but fans really want to know, as do her sisters.

In the short clip shared by Keeping Up with the Kardashians, Kim and Khloe were a bit shocked to see their sister sporting a big hickey. In it, we see the two sisters react quite aggressively about it. But, Kourtney just tells them off, saying “Let me just live my life.” Well, you don’t tell Kim to just back off. She’s certainly not that type of personality. If she gets her interest piqued, rest assured the KUWTK star will get to the bottom of it.

Quick to spot the offending mark on Kourtney’s neck, Kim says, “Kourtney, what is this hickey?” Khloe joins in asking, “What is on your neck?” Well, Kourtney gets smart and tells them her hair’s on her neck. Nope, that’s not an answer. So they persist with their questions. Khloe says, “You have a hickey on your neck? From who?” Next Kim wants to know, saying, “Who on earth would you get a hickey from?” Well, Kim, that’s what we all want to know.

But, KUWTK star Kourtney won’t dish despite the questioning. However, eventually, Kim says she thinks she “knows” who gave it to her. Yahoo Lifestyle ran a Cosmopolitan story about the preview. They noted, “Kourtney says they’re “they’re bored in their own lives” and are trying to live through her.” But some fans see it differently. Some of them think Kourtney’s trying to live her life through her little sister.

What did you think about Kourtney Kardashian sporting a hickey? Do you think that’s something 20-somethings usually do? Who could it be from? Sound off your thoughts in the comments below.

Remember to check back with TV Shows Ace often for more new about the cast of E!’s KUWTK.

Dale Moss Addresses Whether He Would Go On ‘Bachelor in Paradise’ Or ‘The Bachelor’
Why Is ‘The Young And The Restless’ Teasing Another Victoria, Billy, Lily Love Triangle?
‘The Little Couple’ Fans Discuss COVID-19 Vaccine
Reality Steve Confirms ‘The Bachelor’ Matt James Top 5 AND Winner
Dale Moss Mystery Woman, Eleonora Srugo, Releases Statement To Reality Steve