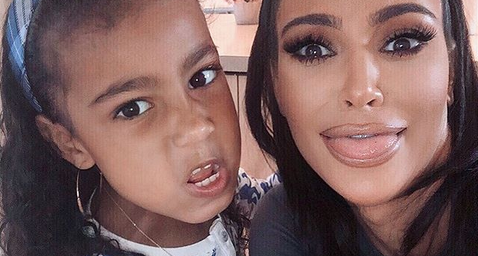 Kim Kardashian and Kanye West seem to look happy together. But appearances aren’t always what they seem. The Keeping Up With the Kardashians reality star is only photographed with her children. Although Kim and Kanye have been spotted out in public on several occasions, she’s tired of being married to him.

Rumors are swirling that Kim is “not happy” with her marriage. Kanye’s wild behavior is wearing on her. And she’s embarrassed by his image and their marriage. While Kim is keeping a united front for the sake of their family, she doesn’t know how much longer she can deal with this.

Kanye has really been into Christianity lately. He’s become a devout Christian and has hosted several of his own Sunday Services. He even stopped making secular music as a result. This has led his famous wife to change her image as well.

But, according to a report via RadarOnline.com, Kim is not totally on board with Kanye’s shenanigans. She doesn’t like their “really strange marriage,” reveals an inside source. This may come as no surprise to some fans, but Kim isn’t happy as she claims to be.

“She is stressed out dealing with his mood wings and manic episodes,” the insider revealed.

The 39-year-old is getting fed up with the rapper. She doesn’t know how much longer she can take. Kim shares the details of her unhappy marriage with her friends, but she’s been putting on a happy face in public. Kim also defends Kanye’s craziness on social media.

“Kanye is going through a really tough time right now,” the insider added. “It is really hard for Kim to deal with. What you see on Instagram and [what you see on] the show is not real.”

This comes after Kanye debuted his new opera Nebuchadnezzar at the Hollywood Bowl on Sunday night. The rapper wore a silver costume. However, the show just included performances from his Sunday Services and his IMAX film that accompanied the release of his new album, Jesus is King. But, of course, it was Kanye’s appearance that had everyone confused, according to a Vanity Fair report.

In an interview with The Cut, the reality star admitted that not every relationship is as perfect as it looks. And she’s made peace with that. Kim revealed that she doesn’t always see eye-to-eye with Kanye. Instead of arguing about it, the couple focuses on what they can learn from that experience and grow from it. Kim also admitted that she no longer poses nude for the sake of their children.

“The one consistent thing is our relationship that has never stopped being fun,” said Kim. “And it’s okay to not understand each other. It’s okay not to have the same exact feelings all the time. It’s about figuring out how do we grow from that? Or what’s the lesson from that? And giving each other space and time to figure that out.”

Kimye argued on their reality show

The couple were seen arguing over Kim’s sexuality on the Oct. 13 episode of Keeping Up With the Kardashians. Kanye told his wife that he doesn’t like it when she takes sexy photos. He said that her photo shoots and sex icon status has crushed his soul and spirit. Following that episode, Kim took Kanye’s advice and has started to cover up.

“He is my husband so I obviously want to honor him and what he’s feeling,” Kim said during her appearance on The Real. “And he’s been going through this life change and it’s mostly about the kids.”

Aside from the outfit choices, Kim also revealed that Kanye has come up with some ground rules for their four children.

“The kids are getting older and he’s very cautious about what we have in house. We got rid of TV in the kids’ rooms and removed makeup from [daughter] North’s room,” she said.

What are your thoughts on Kim Kardashian’s marriage to Kanye West? Sound off below in the comments section.