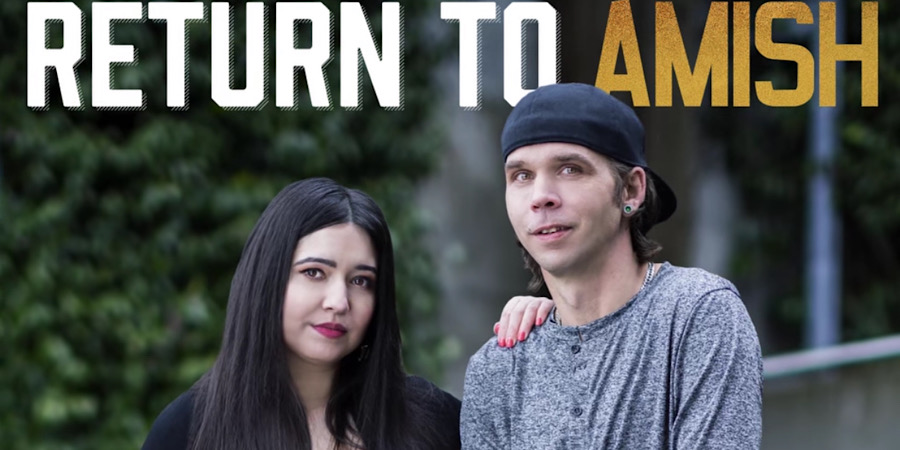 It has been two years since Return to Amish has been on TLC. When fans last saw the cast, Jeremiah discovered his family may not be biological. This led him to start the search for truth while still trying to work on his marriage with Carmela. Sabrina hoped to get sober and find success in a new relationship. They are both back for Season 6 along with new faces navigating quarantine and a pandemic. It’s a lot to manage and viewers are about to witness it all.

Return to Amish Takes a Turn in Florida

Everything starts off in Florida. Newcomer Rosanna, who is actually Rebecca’s cousin, is having a panic attack. Sabrina is trying to comfort her as she shakes and eventually calls for Jeremiah. Sabrina begins to pray over her as they hold a fan above and the paramedics come to the rescue. Flashback to three days earlier. They were having a celebration in honor of Sabrina being clean for two years. She was adopted into the Mennonites when she was three and never felt she fit in. It caused her to rebel pretty hardcore and she had a hard time adjusting to the English world.

She became a heroin addict and signed over the rights to her two eldest daughters. In New Orleans, she had a miscarriage and ended up in rehab, finding God in a positive light. Now she has her boyfriend Jethro, also an ex-Mennonite and a sober buddy. They have a son and now she is pregnant with a little girl. He wants to keep having babies with her and wants to get married, as well.

Jeremiah’s Life and Reconnecting With Ada

In Oregon, Jeremiah shares he and Carmela gave up the donut business they started. It was actually harmful to their relationship so they both are working at the airport instead. Unfortunately, he got jealous of her and a co-worker and that messed the whole situation up. Jeremiah went and confronted the co-worker while on the job in front of their boss and other employees. He grew up in the Amish world and was always judged so living in the English world was great freedom. Jeremiah actually dated Sabrina but it was too tumultuous then he met Carmela on social media.

Because of the pandemic, they decided to go to Florida and isolate themselves with Sabrina and everyone else. They are such a tight-knit crew, it only made sense to be together. He called Ada, who is much like a Mary Schmucker. She helped them with their donut business but put it on hold to start a cleaning business. Though she loves being Amish, she loves the English money.

Ada happens to have a home in an Amish section of Florida so this is where Sabrina and Jeremia will meet up with her. Now viewers meet her granddaughter, Maureen, 19. She is a teacher for first through eighth grade but along with her best friend, Rosanna, they will go to Florida. Maureen was always teased for being overweight but she wants to do so much more in the English world like drive a car.

Rosanna and Maureen met at a tetherball tournament and have been best friends ever since. She is much more into playing with the horses but does have a very feminine side. Hidden is a makeup bag that she keeps away so her mother won’t find it. It is not something the Amish are allowed to indulge in but it makes her feel pretty. She wants to leave this lifestyle because all they do is sleep and work to be closer to God. That is not how she wants to live.

She has talked to her cousin, Rebecca Schmucker and she knows it will be hard to leave this life. But it is something Rosanna desperately wants to do. She has never even been to a beach or worn a bathing suit but the experience is so worth it. Maureen is feeling the pain, too. Once they leave they can never come back. She also will miss her students so much and does not want them to look down on her. Being shunned is also a fear.

Jeremiah and Carmela have made it to Florida since the virus apparently is not so bad there yet. As they enter, Jeremiah gets yelled at to put on a mask. He is not amused and claims he cannot get sick because he has Native American blood in him. Jeremiah has always been defiant one way or another. Sabrina and Jethro have already been living in Ada’s home since she wanted to get out of Pennsylvania. They are there to greet her when she arrives and she will always be on Sabrina’s side.

Ada shares Maureen will be joining them, as well. Jethro and Jeremiah have yet to meet and it comes out that Jeremiah lost his job at the airport. Because Jeremiah and Sabrina may have hooked up, Jethro already does not like him. Sabrina says nothing happened but the footage says otherwise. Jeremiah thinks Jethro is jealous because he and Carmela are married but Sabrina won’t marry him.

In PA, Maureen is preparing to tell her parents she is leaving as is Rosanna. Both families basically say they do not have to ever come back if they leave. The girls meet with their backpacks and have called their taxi, driven by Daniel. He is an ex-Amish whom Maureen has a crush on. Rosanna says she should tell him how she feels since they are leaving but she seems too nervous.

Butting Heads and the Girls Try For Florida

Ada and Jeremiah did not get along at all when they had their donut business. However, she admits she loves him like a son. She tells him she would much rather do housecleaning than ever do the donut business again and Jeremiah would be great at it. Jethro jokes he is not man enough to do outside manual labor and can only work as a housekeeper. This does not sit well with Jeremiah and Sabrina laughs it off. It does not appear they are going to start off the quarantine on the best of terms.

It is time for Daniel to drop the girls at the airport. Before they get out of the taxi, he makes sure Rosanna and Maureen have masks. Then, he writes his number on Maureen’s hand and tells her to call him. They are so excited but can not navigate revolving doors and are scared of the escalator. Even the automatic toilet flusher is amazing to them.

One snag in their plan- they cannot get plane tickets because they do not have photo IDs to buy the tickets. They have social security cards but no photos which is common in their culture. Luckily, Maureen has Daniel’s number so she calls him and he will be there to get them. Their plan is to ask him to drive them to Florida. Rosanna is convinced this was Maureen’s plan all along.

Everyone’s Connecting on Return to Amish…FINALLY

Ada lets Jeremiah know this is her house and he will be respectful. He is hesitant to give her the “yes, ma’am.” But he does because he knows he has to. It soon comes up how he and Sabrina connected so fast. They were both adopted so that common thread really bonded them. Jethro shares he was adopted, as well. His mom reached out to him a year and a half ago while his dad seems to not care much about him. Jeremiah had to admit they are a lot alike. His biological father did try to come to see him once but his Amish parents ran him away. There is a chance he will come to Florida to visit.

Daniel agreed to bring Maureen and Rosanna to Florida and they stop at a lake to play around. But Maureen is frustrated because Rosanna is lifting up her dress and exposing herself. She knows how Maureen feels about Daniel so she should be more respectful. Daniel asks the girls if they have ever “done it” before but they have not even kissed a guy. They laugh as they get all shy. He eventually drops them off and leaves.

This new life is a lot for the girls to take in and Jeremiah notes they seem naive. Though this is Rosanna’s dream, it is a lot for her to take in. This is when the panic attack begins. Return to Amish airs Monday nights at 9 pm on TLC.