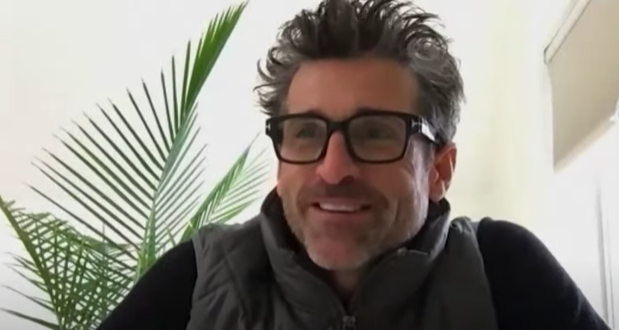 Grey’s Anatomy opened to an entirely new world as fans got to see how the pandemic has affected the medical profession. The hospital is reeling from COVID-19 cases and the battle appears to be all uphill. Fans knew to expect at least one doctor to come down with COVID. Especially after Bailey said, “Hospitals are losing too many of their own” early in the episode. However, after everything that Meredith Grey has been through most fans were not expecting it to be her. However, Grey’s chose to use the emotional bomb of Meredith having COVID for a greater purpose. Her struggle allowed for the return of some long-lost characters, Patrick Dempsey being the first.

Patrick reprised his role as Derek Shepherd, Meredith’s deceased husband, during her COVID-induced blackouts to the absolute delight of fans. Dempsey talked about returning to the role and how much he enjoyed working with Ellen Pompeo and seeing everyone again. He explained, “The intention was right, we really wanted to bring awareness to get people to wear masks to follow the science, and with that energy that sort of brought us into production in a really positive way.”

Dempsey discussed how everyone was nervous that his surprise return might be leaked, but the cast and crew did an amazing job and kept the truth locked down. However, fans really started talking after Dempsey was asked, ”Are you hoping they will carry on after Season 17?”

Dempsey went into almost full evasion mode, smiling and answering, “It will be interesting to see what happens in the next few months.”

Fans immediately began speculating about what Dempsey could mean by his answer. One person adamantly commented, “He knows something… and I have a feeling it’s bad news,” while others if this would be Grey’s last season. Another fan was hesitant to believe the show was ending but did say, “it does feel like the last season.”

With the return of not just Patrick Dempsey but also T.R. Knight’s, George O’Malley the fans are not wrong in saying like the writing this season feels like it’s coming to an end altogether. And Ellen Pompeo is not quelling fans’ fears over the potential end. In an interview with Variety discussing Season 17, Ellen talked about the show’s longevity, saying, “We don’t know when the show is really ending yet. But the truth is, this year could be it.”

Although ABC has not confirmed Season 18 of Grey’s Anatomy, many people doubt the show is going anywhere. Chandra Wilson, the actress for Miranda Bailey, has said before that she will be part of Grey’s until the wheels come off. And her view of whether the show will end after this season is a bit more confident and fact-based. She says, “Because the network’s not ready, the studio’s not ready, the fanbase isn’t ready, the numbers are too good, all of those things. Collectively, they’ve decided we’re not going to put an end on it. We’re just going to wait and see.”

There are always rumors and worries from the fan base of any show of when the end can be expected. Wilson spoke to this as well, explaining, “I know from a creative standpoint there have been many ‘This is how the season would end’ conversations and then they all end up [not happening] because of a myriad of reasons.”

The truth is everything is speculation at this point. But ABC’s Entertainment President Karey Burke did say, “Grey’s Anatomy will live as long as Ellen is interested in playing Meredith Grey. … We will let her lead the pace on that.”

David Eason’s Net Worth: How Does He Support Jenelle?
Daniel Lissing: Leaving ‘When Calls The Heart’ Was ‘Vital’ To Personal Journey
Danielle Busby Ignores Health Issues
‘Yellowstone:’ Will The Dutton Ranch Survive To The End?
Chrishell Stause Goes On Instagram Rant After Split From Keo Motsepe