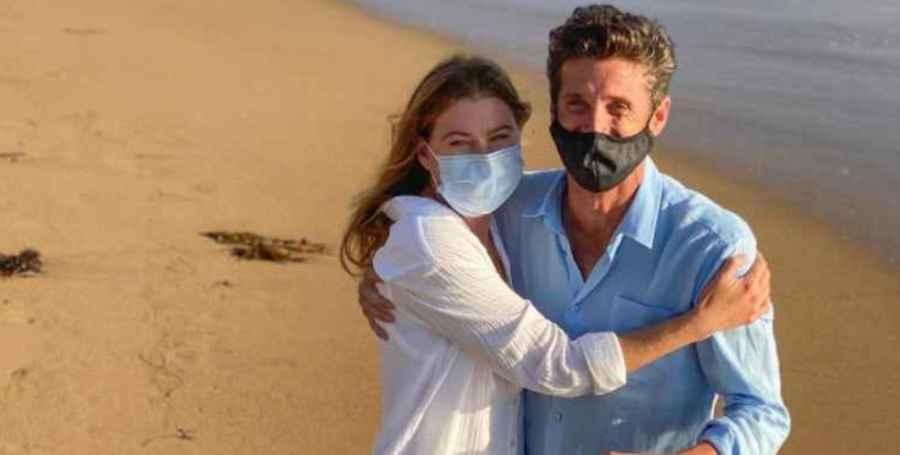 Fans were both horrified and thrilled at the end of the second part of the Season 17 premiere of Grey’s Anatomy. First, they saw an exhausted Meredith Grey (Ellen Pompeo) collapse to the ground. The next scene is a dream sequence, in which Meredith is standing on a beautiful beach. While she stares at the ocean, she hears someone call her name. She turns and finds herself looking at her late husband, Dr. Derek Shepherd, calling her and walking towards her.

This totally unexpected scene caused much emotion, both with fans and with the cast of the show themselves. Most were unaware that Patrick Dempsey would return to the show, albeit on a temporary basis.

In a recent interview with Kevin McKidd (Owen Hunt), he revealed that the cast knew nothing of Dempsey’s return. This meant it was as much as a surprise to them as it was to fans. He was one of the lucky ones who had some advance notice, as he directed the next episode. However, one more character did, indeed, know, as we reveal further on.

As the medical staff at the hospital had been overwhelmed with COVID-19 patients, naturally fans began to suspect that Meredith had been infected too. Now, before we even get to see the next episode, Patrick Dempsey has spoiled the surprise. He has officially confirmed speculation that Meredith is battling COVID-19 herself on the show.

Patrick Dempsey speaks of his return to the show

As noted by Us Magazine, Dempsey, 54, appeared on the Ellen DeGeneres Show on Wednesday, November 18. Speaking of his return to Grey’s Anatomy, he said what a great opportunity it was for fans. Patrick said it was great for them to see everyone reunited, if in a sort of bizarre way. He said it was showrunner Krista Vernoff’s idea for him to return and visit Meredith in her COVID-19 dream state.

Fans were overwhelmed and thrilled to see Dempsey appearing as Dr. Derek Shepherd again. He had played the role for 11 seasons up until his 2015 exit. During the latest episode, Meredith had been working nonstop with COVID-19 patients. She was overwrought and exhausted from the experience and passed out in the parking lot of the hospital. This led to her dream sequence of meeting Derek on the beach.

Vernoff told Deadline earlier this month that there have been studies about how intense people’s dream life can be. During the pandemic, many people are experiencing really intense dreams due to the lockdown. Krista said we are not getting enough stimulation, so it happens in our dreams instead.

That is where the idea started – how do they give viewers some escape. She said she has been imagining a beach motif throughout the season. Vernoff said she called Ellen, asking, what if we bring back a dead character. Someone that she could meet at the beach that would be fun for the viewers. Pompeo immediately said, “Let’s get Patrick.” Vernoff said in her most excitable dream life, that thought hadn’t occurred to her before, but there it was.

Ellen then called Patrick to catch up with him and pitched the idea to her former costar. He was immediately in for it. Dempsey told Ellen DeGeneres on Wednesday’s show that so many souls have been lost right now. He said the idea of having angels around us is a very comforting one. Dempsey confirmed that only he, Vernoff and Pompeo knew about his return until he showed up on the set.

Dempsey said the fact that they kept it a secret made for an incredibly overwhelming and very moving response. Vernoff previously confirmed that he would appear in three more scenes, but Patrick himself isn’t sure of the episode count. However, he did say he knows he will appear throughout the season, as he comes back to visit.

Watch Grey’s Anatomy on ABC on Thursdays at 9 pm ET.

Did Tom Bergeron Just Hint At His Return To ‘Dancing With The Stars?’
Meri Brown Doesn’t Follow Her ‘Sister Wives’ On Instagram
Is ‘Wicked Tuna’ Real Or Staged For The Entertainment Value?
‘The Bold And The Beautiful’ Spoilers: Could Zoe Leave Town For Good?
Whitney Way Thore Like You Have Never Seen Her Before