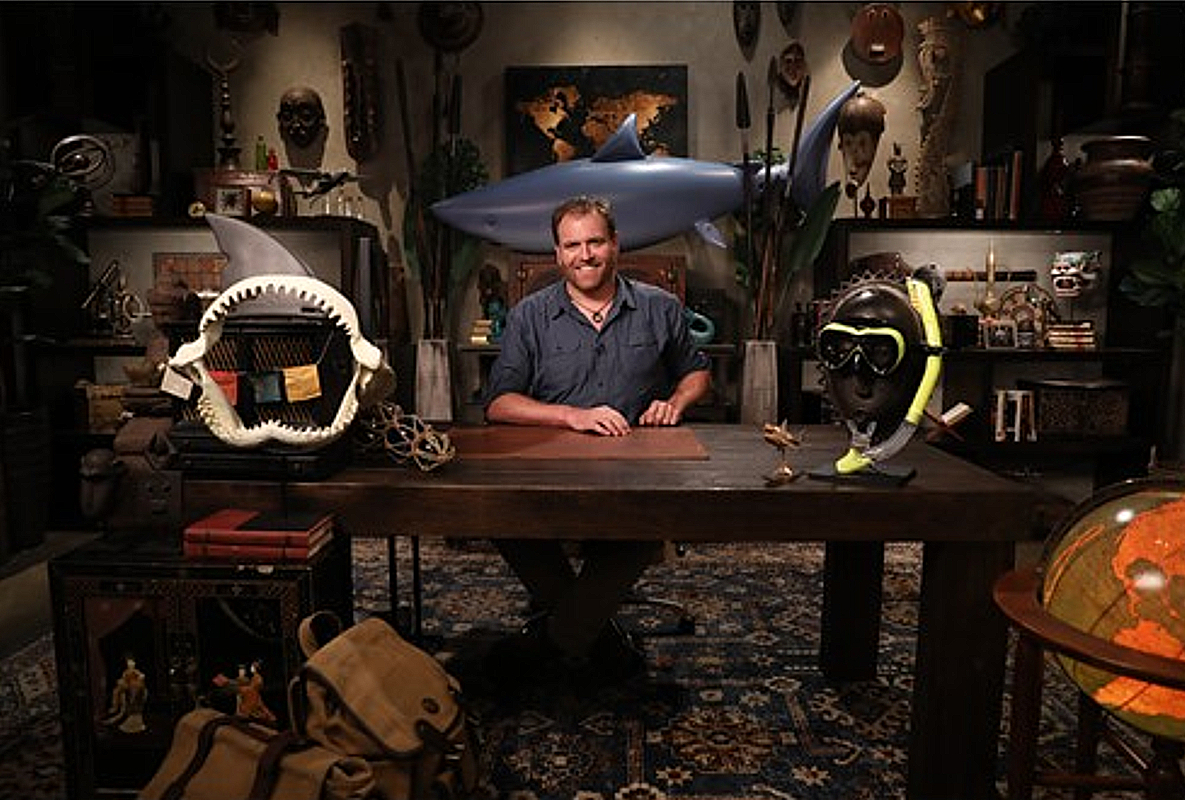 The network has multiple promotions as TV Shows Ace reported yesterday, and fans know whenever Josh is involved in a project, he delivers 100%.

Described by Discovery as an “ardent explorer and adventurer,” Massachusetts native Josh Gates, has traversed the globe investigating history’s greatest legends and mysteries.

Josh Gates Tonight, about the series

For the past three months, Gates’ virtual talk-show has safely produced some memorable moments and brought viewers along for the journey as he’s been exploring the world (often without leaving the house).

Special guest stars for the series have included Steven Soderbergh and Dennis Quaid added to the smart chat show format.

Following Discovery Channel’s jaws-dropping fin-tastic 2020 programming, Gates will be joined virtually by celebrity guests and shark experts each night to highlight and explore some of the most complex, exciting, and shocking moments from this year’s shark event.

And Gates also has shark adventures of his own to discuss as he tests the tiger-shark infested waters at the Georgia Aquarium.

Josh becomes one of the first people to dive into their new shark exhibit, one of the largest in the world. Tiger sharks are considered man-eaters but they are usually not as aggressive as bull sharks which can swim into rivers and freshwater catching swimmers unaware.

The adventure continues as he descends into the aquarium’s 6.3 million-gallon Ocean Voyager tank and swims alongside thousands of aquatic species, including massive whale sharks which are considered gentle giants compared to the wolf packs of blue sharks or the lone predatory bull sharks.

There are extras: In addition to his shark adventures and interviewing celebrity guests, Gates will introduce viewers to Rick Chomp, a shark (puppet) with some “rough edges,” as Discovery says: “[Josh] shares some good news, all shark related, of course, and even makes a splash in the music world as he attempts to unleash a new song even more maddeningly catchy than Baby Shark.

On Tuesday, Gates is joined by comedian Jeff Foxworthy as well as wildlife biologist and conservationist Forrest Galante, star of Extinct Or Alive: Land Of The Lost Sharks. Noted shark expert Paul de Gelder also joins to talk Will Smith: Off The Deep End.

Gates is joined by actors John Corbett and Bo Derek as well as Amber and Serena Shine, stars of Naked and Afraid of Sharks 2. Additionally, Adam Coons from Sharkadelic Summer will share his story of courage as he recounts a recent shark encounter that changed his life.

In addition to watching the series on Discovery, audiences can check out new episodes on the Discovery GO app. Viewers can join the conversation on social media by using the hashtag #JoshGatesTonight and follow Expedition Unknown on Facebook . Host Josh Gates can be found on Facebook: @joshgatesofficial, Twitter: @joshuagates, and Instagram: @gatesygram.

Does ‘Return to Amish’ Jeremiah Raber Finally Find His Father?
‘BIP’ Couple Raven Gates & Adam Gottschalk Finally Married
Mike Johnson Speaks Out About Being Dragged For Dating Outside His Race
Sammy Hagar Shows Johnny Bananas How to Make a Perfect Margarita on ‘Celebrity Sleepover’
Carlin Bates Shares Message About Her Husband: ‘No One Is Perfect’