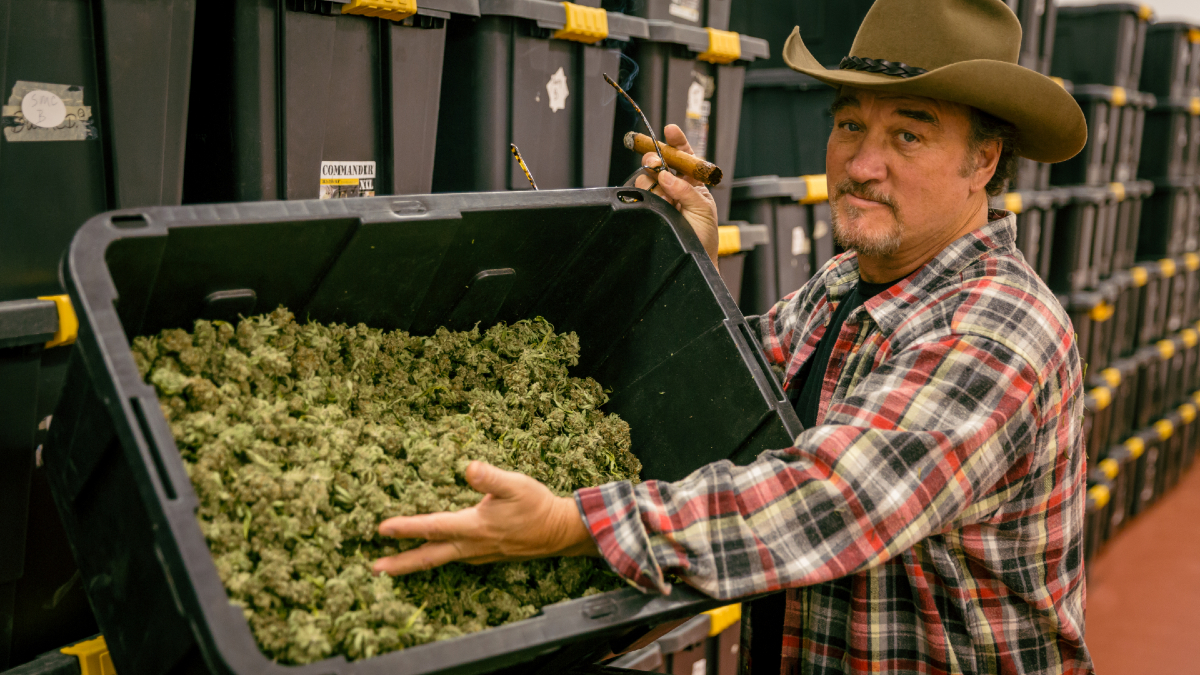 His talents in the agricultural world are shown off in a big way as he is now a legal cannabis farmer.

Passion, know-how, wit and wisdom are the weapons Belushi uses to recreate his life a bit.  Now we see as he expands his world and goes beyond the comfort zone.

Growing legal weed is a cash cow, and Belushi is planning to milk it for all it’s worth on the new Discovery series.

Using his many talents, combined with an immense passion and good old mid-western work ethic, Jim has created a cannabis business from scratch in southern Oregon.

Beginning in 2015, a small crop—48-plants—kicked off what is Jim’s farm today.

The spread encompasses 93 acres along the Rogue River in southern Oregon, offering quite the variety, including Belushi’s Secret Stash (with Jim’s favorite strain Cherry Pie) to Captain Jack’s Gulzar Afghanica (a rare strain from the Hindu Kush region that became known in the ‘70s as “the smell of SNL.”)

Discovery classifies this new spin on a series based on what’s Jim been up to lately TV as “informative, mischievous and moving.”

But fans know that drugs in general have not been the best of friends to the Belushi clan.

Jim’s beloved brother John died of an overdose in 1982–at the height of a truly meteoric career.   Jim has experienced his own journey of learning and healing with cannabis, a generally safer and therapeutic drug that helps with pain, anxiety and cancer medication side effects.

Now Jim has become an outspoken advocate for the positive medical benefits of cannabis including pain management and improving quality of life.

The series offers perspective of Jim’s journey of self-discovery and the Herculean effort it takes to build a legal cannabis farm with the dream of helping others thrive.

“This is much more than a business for me. I’ve seen the positive impact that cannabis has had in treating people from around the world,” said Belushi in a press release. “Everything grows in Growing Belushi. The Cannabis, the business, the family. And especially me. We almost called it Growing Pains!”

True to heart, Jim has decided to dedicate his life to starting and running a flourishing legal cannabis farm. As they navigate the many challenges of this newly legalized industry, Jim and his ragtag team of farmers have an opportunity to follow their passion and find success in something they believe in. Joined by his cousin Chris and with appearances from Dan Aykroyd, Judy Belushi and a cast of misfits (including Jim’s own family), as well as a musical appearance by The Blues Brothers, Growing Belushi will take Discovery’s audiences inside Jim’s world and show the incredible effort it takes to build a legal cannabis operation.

Creatives behind the scenes speak out

“We are always looking for a show that takes you by surprise and this one did – it’s fun and funny and has a lot of heart. I think people will see Jim Belushi in a whole new way after watching,” said Nancy Daniels, Chief Brand Officer, Discovery & Factual in a press statement.

Concert promoters Live Nation are in on the show as well. “Live Nation has had a long, meaningful relationship with Jim Belushi personally and through the Blues Brothers and House of Blues, so we are excited to help with sharing his story of Belushi Farms with Discovery’s audiences,” said Michael Rapino, CEO of Live Nation.

“We are thrilled to continue our long-running partnership with Discovery which has included the Emmy-winning Deadliest Catch, along with the recent spin-off, Deadliest Catch: Bloodline,” said Jeff Hasler, President of Original Productions. “We’ve always been about providing a platform for big dreams and ambitious stories. No one has a bigger dream and more ambition than Jim Belushi.”

Growing Belushi premieres on Discovery Wednesday, August 19 at 10 PM ET/PT and is produced by Original Productions and Live Nation Productions.

In addition to watching the show on Discovery, viewers can stream GROWING BELUSHI by downloading the Discovery GO app. Viewers can join the conversation on social media by using the hashtag #GrowingBelushi and follow Discovery on Facebook, Instagram, and Twitter for the latest updates.