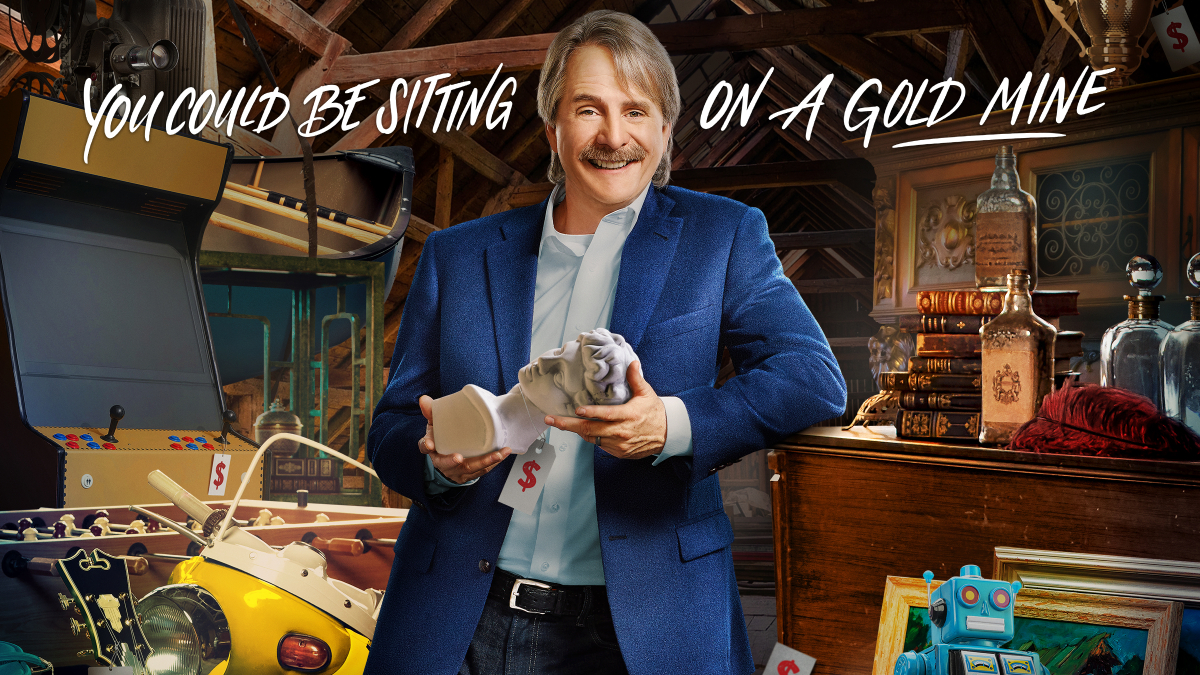 Tonight an exciting new series kicks off on A&E, as Blue Collar Comedy legend and star Jeff Foxworthy is the host of  a new show called What’s It Worth? Remotely, people self videotape and submit their precious offities and finds to have Jeff weigh in with experts to analyze the value.

Over the course of ten 30-minute episodes, comedian and collector Jeff Foxworthy will search the country in search of hidden treasures held by everyday people with hopes to strike it rich.

Fans who have been around more than a minute will spot elements of the old Art Linkletter series, Kids Say The Darndest Things as children pop up unannounced and randomly as their exasperated parents ask them to put their pants on or let mommy speak to Jeff.

The other style factors are a bit of Pawn Stars and Antiques Roadshow, but make no mistake, this is Foxworthy territory as he instantly bonds using his country charm and natural at-ease persona to get people to reveal their backstories on the items in question.

For those who want to be considered for future episodes, TV Shows Ace reached out the to the network and got the exact information you need to send an email with a photo attached of the item, and a brief description of how it came to be yours.

How to get on What’s It Worth?

If you have a cool item or one that has you wondering, you CAN get your items considered.

Please email to whatsitworth@itv.com with “For Consideration for Future What’s It Worth?” typed in subject line.

Make sure to include address and phone number in your email, and a jpeg photo of the item as well in an attachment.

What is What’s It Worth?

Hosted by comedy legend and personal collector Jeff Foxworthy, A&E’s new series What’s It Worth? is a remote treasure hunt in average people’s homes. Foxworthy talks remotely through video to ask the questions and guide the owners to explain how they got the item.

The series is set to premiere on Tuesday, August 4 tonight on A&E.

And with people across the nation spending more time inside their homes than ever, this half-hour series follows Jeff as he scours the country in search of truly unique possessions and collectibles with shocking dollar values—without ever leaving his Georgia man cave.

Along with Jeff are three featured experts—Gina Theesfield, Christie Hatman and Chris Childers. Together they figure out of you can retire early, or perhaps send your collectible to the thrift store.

What’s It Worth?   premieres with two back-to-back episodes tonight.

From the comfort of their homes, Foxworthy and a team of experts may visit your state, town or even someone you know to examine a variety of heirlooms, trinkets and treasures to help people determine if they are sitting on a gold mine, or if they are just holding on to items for the sentimental value. With objects ranging from pop-culture keepsakes, historical relics and even odd mementos, viewers will be surprised by what is uncovered as they hear the personal stories behind these hidden treasures, some of which are equally as impressive as the dollar value itself.

What’s It Worth? Premieres Tuesday, August 4 at 9pm ET/PT on A&E.