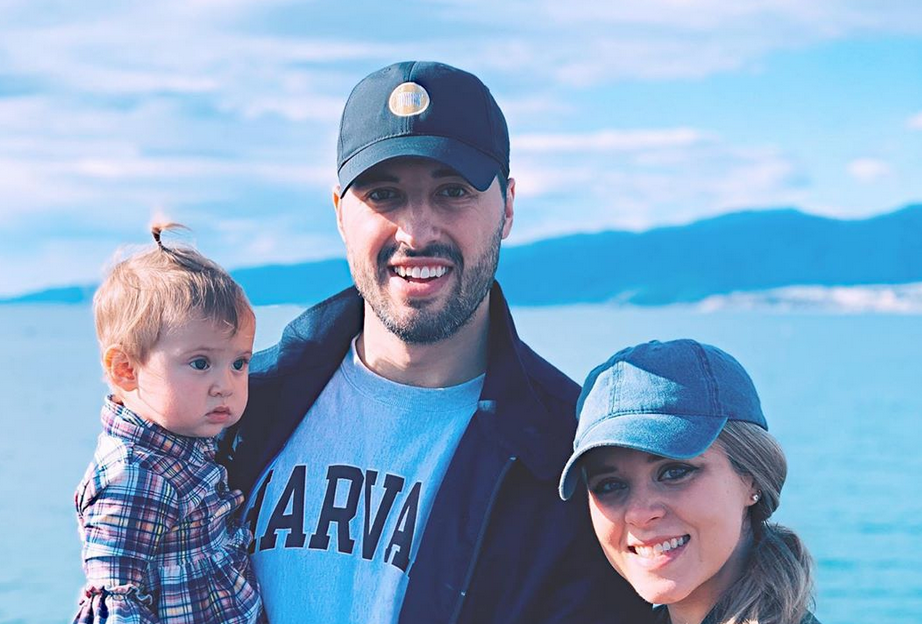 After Jinger Vuolo shared a video of her nearly 20-month-old daughter, Felicity, dancing, Duggar fans are hopeful she’ll have a “normal” life. TV Shows Ace reported that Felicity was dancing to the “Baby Shark” song as she put together a puzzle. The little girl was dancing while sitting at first. Then, she just couldn’t help herself. She stood up and continued dancing. Fans think it’s really adorable.

But, the fact that Felicity is dancing got fans thinking that she might live a “normal” life. Because the Duggar family is opposed to dancing, it came as somewhat of a shock that Felicity would be dancing. Fans are taking this as a sign that Felicity won’t be as restricted as her mom, aunts, and uncles were when they lived under Jim Bob and Michelle’s roof.

In the video that Jinger shared, Felicity is wearing a pair of gray sweatpants and a tee shirt. She is also wearing tennis shoes. And, she isn’t wearing  a bow in her hair like she usually does. Now, this isn’t anything monumental for most families. But, it’s a big deal in the Duggar family. The family is big on modesty, so the girls always wear skirts and dresses. Also, many of the little girls in the family wear bows in every single photo. Based on this, fans are excited to see that Felicity is dressing like a “normal” toddler.

It seems that when Jinger takes her daughter out, she often wears dresses. She’s been spotted in jeans while out and about too. Even though this is only about her clothing, fans think it’s a good sign that Felicity might have a different childhood than her mom did.

When Jer and I first met and began talking, we found out we were more similar than we initially thought. We both love exploring new places, meeting new people, and are quite adventurous when it comes to trying new foods. . Though we had all these in common and much more, the one thing I’ve always admired the most about Jer is his unconditional love and compassion for others—flowing from his first love and devotion to Christ. . Single ladies, if you’re looking for a future spouse, never lose sight of the things that matter the most. Does this man love Christ more than anything? How does he care for the weakest around him who can never repay? What are his priorities in life? How is he currently living out these things he speaks of now? . So many thoughts to ponder when praying about, and waiting for a future spouse. 🙏🏻 Just a few thoughts from a grateful wife. It’s worth the wait! 🖤

Over on Reddit, a discussion started about Felicity’s childhood. One user thinks that Jinger and Jeremy might pretend to be more conservative than they are when they’re around Jinger’s family. The user wrote, “Am I the only one who thinks j&j put on the fundie front for the parents in Arkansas and live an actual minstream music, Netflix & avo toast So Cali life in LA? Come summer theyll be at the beach with the rest of us.”

This has been discussed before because Jinger seems to wear dresses around her family rather than wearing the jeans she does back in Los Angeles. Perhaps Jinger isn’t comfortable enough to wear jeans around her family yet. She may be trying to keep the peace.

Several users also mentioned that Jinger and Jeremy might send Felicity to public school. Jinger’s sister Jill Dillard recently enrolled her son in public kindergarten, as reported by TV Shows Ace. Fans are thinking that several other Duggar kids might be sending their own children to public or private school, despite Michelle homeschooling all 19 of her kids.

Jinger has partnered with several brands over the past year or so. But, she’s lost a handful of those partnerships. Based on what the companies have revealed later, it seems that they don’t agree with Jinger’s values. As reported by TV Shows Ace, Jinger has lost three partnerships recently. This includes partnerships with Fonut Bakery and Ruggable. She was also going to attend a Rebecca Minkoff event, but something happened last-minute and she didn’t go. It’s possible she pulled out because she lost the Fonuts partnership around the same time.

She's as excited as us when it comes to exploring Los Angeles. 😊

On Reddit, one user shared a possible reason behind Felicity appearing to be “normal” in the latest video. They wrote, “I don’t know, I think it’s the opposite. I think they are trying to save face to stop losing the promotions they are losing. They are trying to appear more mainstream in the hopes that people won’t contact companies and they lose sponsorships.”

Some of the companies that Jinger has lost partnerships with seem to dislike the Duggar family’s view on homosexuality, along with some of their other views. The companies don’t always know Jinger’s background, but it’s sometimes brought to their attention. For this reason, Jinger may be trying to set herself apart from her family and make companies think she’s different, whether it’s true or not.

What do you think about Felicity’s new video? Do you think it’s a hint she’ll live a more normal childhood than her mom did? Share your thoguhts below.