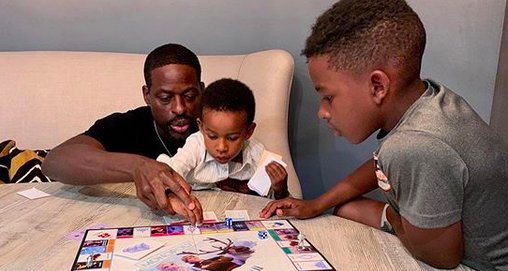 Fans of NBC‘s This Is Us know that it’s not necessarily a kids’ show. Many parents are unlikely to let their kids watch it until they’re tweens or teens. Still, Sterling K. Brown’s kids have managed to form their own opinions about the show. Brown plays the role of Randall Pearson on the show.

Recently, Brown spoke with Us Weekly about his role and his kids too. He revealed that his kids don’t like the show. Brown said, “They can’t watch it. It’s nine o’clock. They’re both in bed, but it [also] keeps me from them a lot. They’re like, ‘Are you going off to do This is Us again?’ And I’m like, ‘I’m sorry guys, Daddy will be back as soon as possible.’ They’re like, ‘OK.’ Anytime something takes dad away, it’s not cool.”

Brown is the father of two kids. Andrew is eight years old and Amaré is four years old. The two boys have had a few opportunities to walk the red carpet with their famous father. Based on what Brown has shared, it doesn’t sound like they mind it. It might be a little bit overwhelming for them though. He explained, “They like getting their picture taken. But Amaré, after he finished going through the line and getting all the flashes, he started blinking his eyes like, ‘That was crazy.’ I was like, ‘Tell me about it.’”

Even though Brown has lost “cool points” for being away and filming This Is Us, he has redeemed himself! Fans of Brown might recall that he’s had roles in both Angry Birds 2 and Frozen 2. These are kids’ movies that his kids can happily enjoy.

He shared that his family watches those movies together. Brown was also in Black Panther, which his kids are allowed to watch as well.

Via social media, Brown often updates his fans with news about This Is Us. He occasionally adds a post about his sons. Fans of Brown and the hit NBC drama think that he seems like a great dad.

Several shows on NBC take a break halfway through the season. Some of these titles include This Is Us and New Amsterdam.

So far, this season of This Is Us has been jam-packed with drama. Of course, fans have come to expect that by now. There is still plenty to wrap up in Season 4, which resumes very soon.

When you only make it through one pound of the holiday shrimp cocktail. 🍤 #ThisIsUs | 📷: @sterlingkbrown

There’s still a chance that the show will have some loose ends to tie up in the upcoming seasons. As of right now, there will be a total of six seasons of the show. This seems to be set in stone, but who knows what will really happen?

You can watch This Is Us on NBC on Tuesday, January 14. The fourth season has a total of 18 episodes. Nine of those already aired, so the remaining nine will air starting on January 14.

What do you think of Sterling K. Brown’s kids’ comments about the show? Will you be watching This Is Us when it returns to TV soon? Leave a comment below.