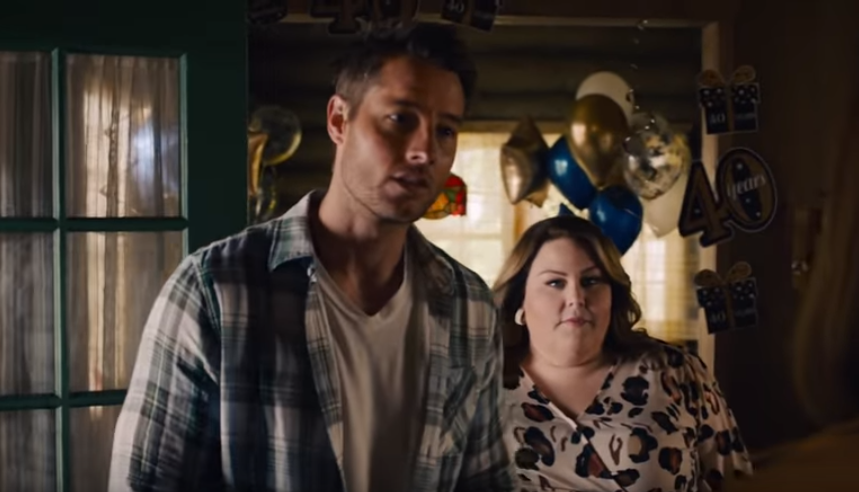 This Is Us aired its fall finale, “So Long, Marianne” on Tuesday, November 19th. Many twists and turns came out of this episode for the Pearson family while they gathered for Thanksgiving.

Randall (Sterling K. Brown), made an agreement with his mother Rebecca (Mandy Moore), to keep her memory loss a secret. After an argument about the situation, she decided to take a solo outing, in which she realized she does need help. During a flash into the future, while celebrating the Big Three’s 40th birthday, Rebecca went out to get a cake to surprise them. Along the way she got lost, misplaced her phone, thought she saw William, and had a meltdown in a restaurant. In the end, she needed help from the police to get home.

The cops brought her back to the family cabin, where Kevin (Justin Hartley), and Kate (Chrissy Metz), were worrying. It was noted that Kevin’s fiance, whose identity has not been revealed, had morning sickness. Earlier he had vowed that he would have a wife and kid by this particular birthday. Moments later, Rebecca asked if Randall was coming to join them, Kevin reminded her that they weren’t speaking.

Glad that Cassidy found her way back home. Even happier to have @jennifermorrison on the show with us. We have fun! #ThisIsUs

Beth And Kate Have Some Anger To Deal With

Back in the present, Kate and Beth (Susan Kelechi Watson) both made confessions to each other. Kate confessed that she hated Crossfit Toby (Chris Sullivan), after losing the weight without her like they had said they’d do, Kate had some resentment. Beth encouraged her to share these feelings with her husband, as it’s not good to only discuss your marriage with people outside of it. But Kate couldn’t bring herself to do it. Later, she saw a message on his phone from one of his workout buddies that read, “Don’t let her bring you down.”

Beth confessed that she was jealous of Deja’s (Lyric Ross) mom, Shauna (Joy Brunson) because she was doing so well. Deja didn’t seem to be too thrilled about it either, she was upset her mom couldn’t do this well for her. Later, Beth comforted Deja, showing that she still has importance in Deja’s life as her adoptive mother.

UsWeekly shared that Nicky (Griffin Dunne) joined the family for Thanksgiving as well. He even brought back a tradition he shared with Jack (Milo Ventimiglia). It was a heartwarming sentiment to share after learning that Jack shared his memories of Nicky with his kids, even if he wasn’t always mentioned. Flashing to the future, Toby and Kate’s son Jack (Blake Stadnik), carried on with the tradition for Thanksgiving.

Tess (Eris Baker) had her time to shine in the episode as well. After talking out her personal issues with her Uncle Kevin, she came out to her classmates on Instagram. Later greeted with an overwhelmingly positive response.

This Is Us fans have quite the season left for them when the show returns in January.

‘Return To Amish’: Does Rosanna’s First Date Turn From Hot To Cold?
‘When Calls The Heart’ Photos Are Spoilers For Season 8 Finale
Josh Duggar Claims He’s Innocent & Not A Flight Risk, Wants Out On Bail
Katie Thurston Claps Back At Haters After Buzzy ‘Bachelorette’ Promo
Does Danielle Busby Finally Get Answers About Her Health?