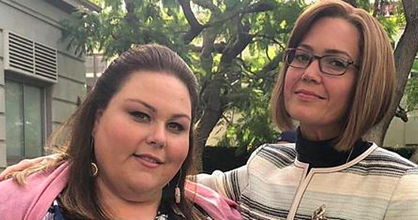 As of right now, fans have not heard much about the upcoming season of NBC’s This Is Us. The first episode of Season 4 of the hit drama premieres on Tuesday, September 24 at 9 p.m. on NBC. The Season 3 finale aired in April so fans are definitely ready for this next season. In the meantime, fans have been speculating about what will happen.

Some of the stars have shared small sneak peeks here and there, but fans still have plenty of questions about Season 4 and the end of the series with Season 6.

Chrissy Metz knows how This Is Us ends

Recently, Chrissy Metz, who plays Kate Pearson on This Is Us, was on Watch What Happens Live with Andy Cohen. During this appearance, a fan called in and asked about Season 4.

The cast knows how the entire series comes to a close. They have even begun filming parts of it. Metz weighed in on the series finale, saying, “It’s definitely gratifying. I’m sort of nervous and scared about it because there’s so much going on, but no, it’s satisfying. I think everyone will be satisfied.”

The good thing is that we still have three full seasons to watch before the series comes to a close. As of right now, it looks like it will end with Season 6. Fans are hopeful that it will be renewed again, but no announcements have been made.

What’s ahead in Season 4?

Every season of the show is a surprise. Each episode is packed with drama. Though we don’t know exactly what to expect come this fall, Mandy Moore and Metz have shared a few of the details.

Recently, Moore spoke with The Wrap. She said, “But there is a twist at the end of the first episode that even I didn’t see coming and I feel like it’s, not to build it up too much, but it feels analogous to the pilot where it’s like, ‘Whoa, I was not expecting that!’ It’s so beautifully done.”

Metz talked with E! News and said, “I think we’re going to see…what the teenagers have gone through and how the shapes the Big Three into adulthood. We’re going to see Kate and Toby co-parenting and how/if that will change the dynamic in their relationship. What I’m excited about is it’s unexpected, but also really important in the way that Dan and the writers have orchestrated Kate and Toby and Jack.”

Also, Jennifer Morrison will be joining the cast. At this point, we only know that she is playing an important role and that she will be sticking around for a while. It’s possible that she will be Kevin Pearson’s love interest based on how Season 3 ended.

Will you be watching Season 4 of This Is Us? What are you looking forward to this season? Leave a comment below!

This Is Us returns to NBC on Tuesday, September 24 at 9 p.m. In the meantime, stay tuned for updates about the show and the cast.