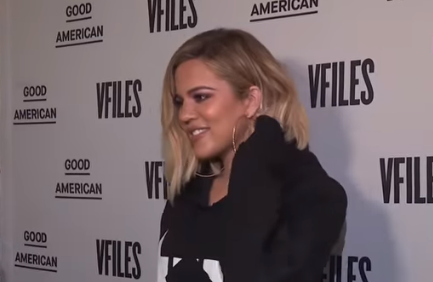 Khloe Kardashian just posted a photo of her Christmas tree and it has quite a unique approach. She chose a non-traditional approach with a blush pink palette for her tree. This is right in line with her recent Pink Diamond perfume with KKW Fragrances as well as her feisty personality. Her green Christmas tree had been decorated with pink feathers surrounded by white, blush and dark pink ball ornaments. So, the added lights had the tree brightly lit with shades of white and pink. Khloe got the perfect photo with a matching pink sunset in the background. To add a little winter to her California Christmas, icicle ornaments were the finishing touch.

The Mastermind Who Help Khloe Is The Close Family Friend, Jeff Leatham

Khloe had a simple caption, a simple shoutout to Jeff Leatham, a family friend, and florist. Leatham is also the artistic director of Paris’ Four Seasons George V Hotel. It appears the stunning tree was a collaboration. His name might ring a bell to fans of the Kardashian-Jenner family, he was the mastermind behind the iconic flower wall at Kim Kardashian and Kanye West‘s wedding in 2014. This beautiful creation inspired a years-long social media trend. He also did the florals at Khloe’s baby shower in March 2018 at the Hotel Bel-Air, the creation included over 20,000 carnations. Kris Jenner even officiated Jeff’s marriage to Colton Haynes of American Horror Story back in 2018.

Khloe chose a completely different path for her decor than Kim did. According to Hollywood Life, she seemed to cause some controversy with her minimalist approach this year. Kim chose to repurpose some of her white decor pieces from her Christmas Eve party last year. She placed white cutouts resembling snowballs and tress in the hallways. She added an all-white Christmas tree to match the theme. Some fans felt this modern approach wasn’t enough, they even compared some of the pieces to marshmallows and tampons. Kim isn’t changing her decor, she even purposely described it as “whimsical.”

Kendall Jenner Kept It Traditional With An Added Touch Of Kris

Kendall Jenner decided to be completely different from her sisters and took a traditional approach. She debuted her tree on Instagram on Tuesday. She showed off her gorgeous courtyard lined with lights and decorative garlands. As she walked through her glass doors, a brightly lit tree was revealed. It was a pretty classic tree with bright white lights with a touch of Kris, large black ornaments.

Kim commented on Khloe’s pink tree, “Stunning!” Kourtney Kardashian chimed in lovingly, “That pink sunrise.” Jeff also chimed in, being part of the artist of the work, “You are Christmas Love Babes. Always such an honor to collaborate with you. She’s a beauty. Love you.” With lots of love and festive emojis to pair.