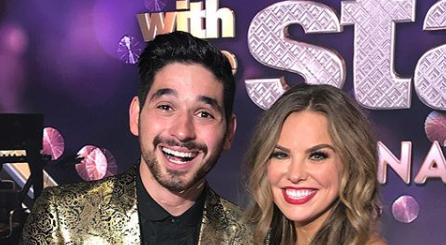 From the looks of it, the Dancing With the Stars – Live Tour 2020 is going to be stellar! During the season 28 finale Monday night, Tom Bergeron announced some cast members who will be joining the tour. January 9th in Richmond, Virginia is the kickoff for the nationwide tour.

Ally Brooke, Lauren Alania, Kel Mitchell, Kate Flannery, Sailor Brinkley-Cook, and Hannah Brown were announced to be on the upcoming tour. Valentin Chmerkovskiy, Sailor’s pro partner was very excited about the reveal, “I’m so excited that Sailor is joining the tour! I was really sad that her dance journey was cut short, but I’m excited that she gets to keep dancing and keeps being part of the family.”

“The cool thing about the tour is that it takes away the element of the competition and still brings all your favorites and that kind of makes it that much more fun,” he continued. “It’s nice to just get on stage and just feel the love from our fans… this is 100% awesome.”

Joining the celebrity dancers on the road will be some of the pro dancers from the show, Witney Carson, Gleb Savchenko, Lindsay Arnold, Emma Slater, Sasha Farber, Brandon Armstrong, Daniella Karagach, Pasha Pashkov and Alan Bersten. Chmerkovskiy and Johnson will also be part of the pro dancer tour cast. Fans got a sneak-peak of what they’ll see on tour, the cast performed to Whitney Houston’s “How Will I Know” Monday night.

I’m proud of you. Keep your head up champ!

“A lot of you have been asking if Hannah could be joining me on the DWTS Live Tour… that would be awesome!” Bersten teased earlier in the season. “Honestly, we’re just thinking one week at a time right now. But I know Hannah would love the tour, it’s so much fun! I love tour because that is when I get to meet all the fans who are supporting and voting for us each week on the show.”

According to Yahoo!, Brinkley-Cook shared some interest in joining the tour with Chmerkovskiy earlier this year. “There is a chance,” Chmerkovskiy teased fans. “There is definitely a chance. And I think the cast would love to have her. I think that’s a big deal. We as dancers, this is our sixth or seventh tour on the road. It’s a 50-city tour, it’s a beautiful experience. But that’s our little thing, right? The TV show, that’s celebrities. The tour is sort of our little thing, so it’s important that the cast embraces a celebrity and Sailor, man, all the dancers, all the pros love Sailor and would love to tour with her.”

Brinkley-Cook chimed in, “I love them, I miss you guys!”