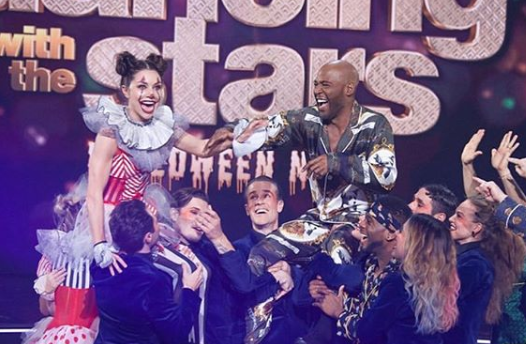 Though they were eliminated on this week’s Dancing With the Stars, Karamo Brown’s and Jenna Johnson’s hearts are full.

The partners are devastated but not completely heartbroken

The judges’ decision was tough and, in the end, they chose to save Kate Flannery as their Halloween week came to an end.

“Obviously I’m devastated that we’re not rehearsing right now,” said Jenna. “But I think that I’m just so overwhelmed with how amazing this season was that I’m not upset, because I feel like every week we did our best.”

Karamo agreed, adding, “It is bittersweet because we went out on a high note.”

Brown admitted that the experience he’s had on the dance competition has turned the tables on his Queer Eye role. The licensed social worker helps the “heroes” of Queer Eye process their emotions and be more vulnerable. His appearance on DWTS has helped Brown remember that vulnerability can be a sign of strength.

“Sometimes you forget that you need to ask for help, and even though I can guide people and I’m great at it, even myself I needed guidance,” he continued. “If it wasn’t for Jenna, I would not have been able to make it to even week seven because from week one, when we got low scores, she was like, ‘Don’t worry, you can push yourself.’”

Not only did DWTS connect dance partners, but they also created a friendship

Jenna Johnson said she had never been so happy after being eliminated and praised Karamo for taking risks. Jenna is an experienced DWTS professional, having been through many seasons already. “I feel like Karamo grew so much during this whole competition,” she said.

According to UsWeekly, the two were very supportive of each other throughout the show and became fast friends. Brown even mentioned that he would love for Johnson to dance at his wedding. Karamo Brown got engaged to his partner, Ian Jordan, in May 2018. Karamo popped the question at a surprise 40th birthday party for his partner of eight years.

Wonderful quick getaway to NYC this past weekend with my love and our boys. #nyc #statueofliberty #sundayfunday #family

Though he’s out of the competition, Karamo Brown is still grateful for the new challenges he experienced with Johnson during his time on the show. “It pushed me to say, ‘Can I do this? Can I try this?’” Brown said. “I think if anybody out there is thinking to themselves, ‘There’s something I want to do,’ they should go and try it right now.”