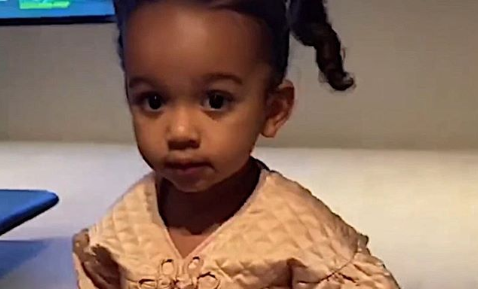 Kim Kardashian’s Halloween Instagram post of her family looked a bit… odd. Chicago West had to be edited into the picture with everyone else because of her fear of Dino the family pet.

Kanye seemed to be the most dedicated to his character. He dressed up as Dino, the Flintstone family pet, a head-to-toe costume. He posed with his wife and kids with their prehistoric backdrop.

The second-youngest child, Chicago West, 21 months, seemed a little more to the side than she normally would be. But it was pretty noticeable that she had been doctored into the shot.

“This family pic was such a challenge because Chicago was so scared of Dino! LOL We tried to explain and show her that it was just daddy but she didn’t get the concept yet! So shout out to the photographer for editing her in & making our family Flintstone dreams come true!” Kim captioned the post of her family.

This family pic was such a challenge because Chicago was so scared of Dino! LOL We tried to explain and show her that it was just daddy but she didn’t get the concept yet! So shout out to the photographer for editing her in & making our family Flintstones dreams come true!

But a closer look shows how much cuter this costume is. Saint, 3, and North, 6, led the family as Fred and Wilma Flintstone, respectively. Their little sister Chicago had a red wig with a faux bone to portray their daughter, Pebbles.

Kim Kardashian herself was looking picture-perfect as Betty Rubble, with a little Bamm-Bamm in her arms, Psalm looking absolutely adorable. The family photo was only one of three posts, the other two showed off some of the family’s outfits individually.

Has Chicago’s Bravery Come To An End?

According to People, Chicago’s fear of her dad in the Dino costume could be surprising to fans of the Kardashian-Jenner family. In the past, the toddler has shown some age-defying bravery.

In August, Kardashian West posted a video to her Instagram of her young daughter getting up close and personal with a snake. She gently and fearlessly grasped the reptile and held it in her arms as it slithered around her. She giggled when the snake handler showed her another one. Toward the end of the video, she gave a smile to the camera and hugged the snake she was holding.

Kim Kardashian captioned the video, “My brave girl Chicago.” The video was presumably recorded while Kim and the kids vacationed in the Bahamas. They were vacationing with Khloe Kardashian and her daughter, True, 18 months.