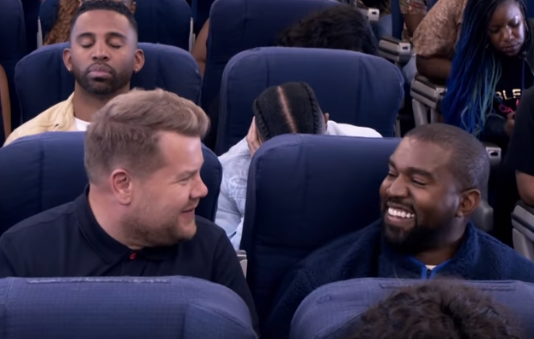 In 2011 Kim Kardashian married Kris Humphries, but 72 days later they ended their marriage. Kanye West, Kim’s current husband, just made a joke about it.

He Wants More Kids But She Says She’s Too Busy

Kanye West has been the latest celebrity to be on James Corden’s Carpool Karaoke, but this time with a twist. James and Kanye were on a plane with Kanye’s gospel choir.

Kanye finally released his much-awaited album, ‘Jesus Is King’ that has been delayed and pushed back for months. Part of the press tour has been appearing on James Corden’s The Late Late Show, participating in what has been called “Airpool Karaoke.”

In the episode, James needs some help getting back to LA. So he jumps onto an airplane with Kanye and his choir, who have been performing their Sunday services this year.

James discussed the new album and Kanye’s newfound Christianity. He went on to ask him about the success of his marriage with Kim and their family.“The richest thing you can have is as many children as possible,” Kanye comments. “[I want] seven children.”

This comment is a bit contradictory to what Kim has said about having kids. According to People, Kim says she is definitely done. She loves her four babies but she’s too busy for more right now. The couple currently has four children, two sons Psalm, 5 months and Saint, 3 and two daughters Chicago, 21 months and North, 6.

Kanye shared some of his life at home and with his family with the host. Stating that he doesn’t “like going out at nighttime,” and prefers “being at home with my family at night as much as possible.” Showing that Kanye really is trying to take on the role of a caring father and husband, which is quite a different role from the Kanye everyone saw before marriage and kids.

He continued about their marriage. “Marriage years are different to normal years. You know how dog years is like seven years? Every marriage year feels like one hundred years. So we’ve been married for 500 years.”

Kanye West commented on marriage in general and how he influenced people’s opinions of it. “People thought it would be uncool to get married, and then I got married and then people went, ‘Oh, that looks cool’.”

Kanye laughed and made a joke, “Well, not Kris Humphries,” in reference to Kim’s 2011 marriage to Kris Humphries that lasted 72-days.

Netflix Reveals If It Will Save ‘Manifest’ From Cancelation
Braunwyn Windham-Burke Is Dating This ‘RHOC’ Star
‘GH’ Kirsten Storms Shares Surgical Scar Photo, Reveals Shaved Head
Wait, Why Isn’t A New Episode Of ‘Extreme Sisters’ On?!
Does Bennett Jordan From ‘Bachelorette’ Regret The Argument With Noah Erb?