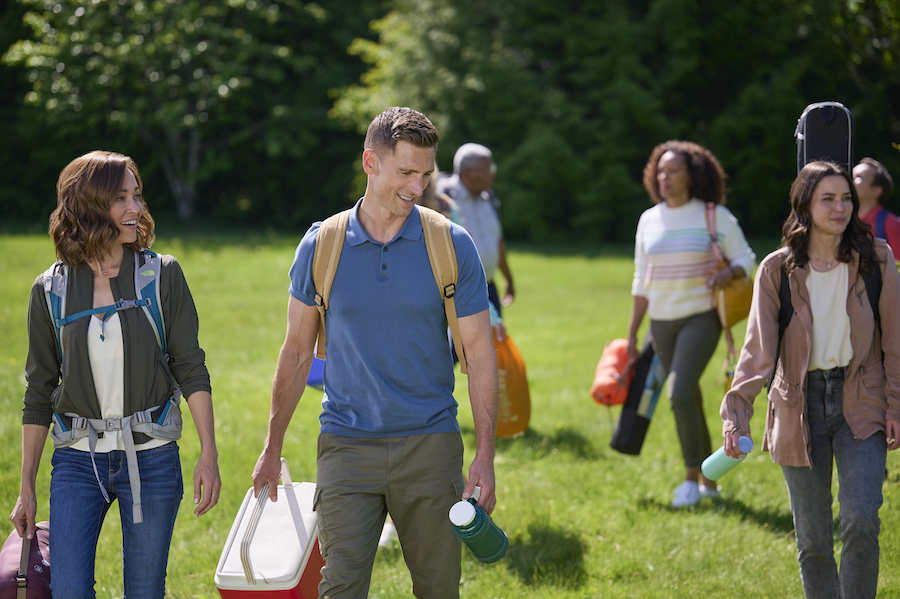 Ready to find some balance? This is your restorative romance!

What Is Hallmark’s The 27-Hour Day About?

According to the Hallmark synopsis, Lauren (Reeser) is an established creator and ambassador of her wellness brand called The 27-Hour Day. She runs a blog on wellness and efficiency. Her mission is to give the best tips and tricks to make life’s daily chores and activities more efficient. She prides herself as a “girl on the go.”

However, when an important meeting with her business idol goes awry, Lauren realizes she may need to step away to get some perspective. Foreign to the concept of taking a break, Lauren agrees to go to a mountain retreat. She needs to reconnect with herself.

Upon arrival, she hands over all forms of electronics and tries to forget about work. While there, she meets others – Heather (Doucet-Roche), a tireless wedding planner, a couple trying to rekindle their marriage, and Roger (Pickett), a bored retiree.

Lauren also comes across retreat owner Jack (Walker) who can immediately tell she’s a workaholic from a big city. Jack is looking to expand his family business, not get involved with a guest, but there’s just something about Lauren. While he teaches her to relax, she teaches him to “seize the moment.”

During this transformative week in the calm setting of the Montana mountains, Lauren realizes she needs to reprioritize what’s important in her life as she finds herself beginning to fall for Jack.

She also wonders how life will be once she returns to New York and whether Jack will follow?

When Can You Watch Hallmark’s The 27-Hour Day?

Make sure to jump on Twitter on premiere night, and tweet along as you watch your movie. Hallmark stars share some BTS insights and other fun facts.

Autumn Reeser, Andrew Walker Interview Each Other On Deck The Hallmark

Fans of the hysterical podcast, Deck The Hallmark, already know a bit about The 27-Hour Day. That is because Autumn Reeser and Andrew Walker interviewed each other about this movie and their own careers.

First of all, this is a project that Autumn has been working on for the past three years. Unfortunately, Covid sidetracked things a bit, but it seems that this quarantine time only added to the story. Moreover, Autumn wanted Andrew to co-star with her. However, she discovered that she may be a producer, but you don’t always get a say in who stars in your movies. Thankfully, she got her dream casting, in what she calls a “magical” set of circumstances and they were “divinely aligned.”

Reeser’s own real-life experience of running an online magazine resulted in an awakening that is akin to her character Lauren. She realized she didn’t want to live her life in front of a computer screen.

When they first began this interview, they revealed that they had never worked together. However, after some chatting, the two discovered that they had briefly starred on a show together. Andrew revealed that his big break was a show called Maybe It’s Me. Autumn piped in, “I was on that show!” They have “definitely met!” before. But that was 20 years ago. However, The 27-Hour Day is officially their first Hallmark movie together.

Another fun fact is that Andrew’s first big Hollywood moment, Are You Afraid of the Dark, was directed by David Winning. David Winning is the director of The 27-Hour Day!

Be sure to catch the premiere of The 27-Hour Day on Saturday, August 7, at 9 p.m. Eastern, on the Hallmark Channel.