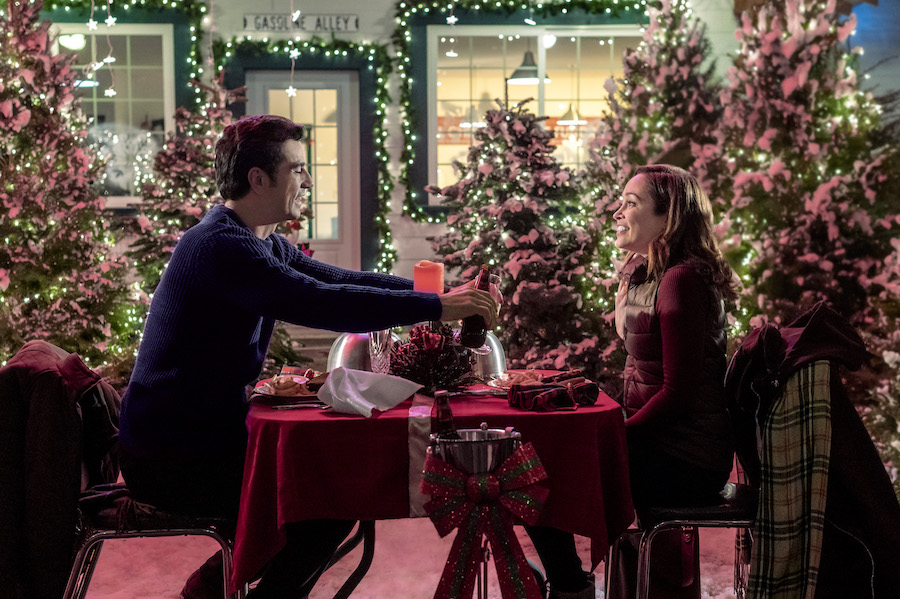 A woman returns back to her mother’s hometown, incognito. This is the premise of Hallmark Movies & Mysteries’ new movie, A Glenbrooke Christmas. This movie reunites Autumn Reeser (Christmas Under The Stars), with Antonio Cupo (Blood & Treasure). What do we know about this Miracles of Christmas movie?

What Is Hallmark’s A Glenbrooke Christmas About?

According to the Hallmark press release, Jessica Morgan (Reeser) has returned to her mother’s hometown of Glenbrooke. She wants to see the church bells that were a key part to her parent’s beautiful romance.

Having been raised by her influential, and ultra-rich grandfather, this heiress will soon be taking over the family business. But, she wants to live like normal, if just for a little bit. When she arrives to the small town of Glenbrooke, she enjoys her anonymity. Everyone likes her for herself.

Unfortunately, the bells are not working. But, there is a firefighter Kyle (Cupo) who is trying to remedy this problem. He wants to get the bells working for Christmas. Without letting anyone know her secret, Jessica works on raising the funds needed to fix the bells. She also gets very close to the very handsome Kyle.

Moreover, Jessica feels that she is part of the local community. The bells have brought her closer to the townsfolk, and she feels very close to people there. Most of all, she feels closer to Kyle.

But, with Christmas approaching, she is like Cinderella awaiting the strike of midnight. All of her fun will be done, and she will have to return to her high-profile responsibilities. Most of all, she needs to tell Kyle, and the town, who she really is.

When Can You See A Glenbrooke Christmas?

Also be sure to go to Twitter on premiere night. Follow the hashtags and join the Hallmark community in talking about this new movie.

Autumn Reeser and Antonio Cupo have worked on other Hallmark movies together. They were previously in the beloved holiday movie, Love at the Thanksgiving Day Parade. In addition, they starred together in, I Do, I Do, I Do.

Love At The Thanksgiving Parade is surely remembered for Autumn’s character’s amazing and quirky, vintage clothing. And of course, the song “Heart of Glass.” She sings it after a broken heart and a heaping amount of champagne. This is pretty much when she discovers that Antonio’s character isn’t quite the evil business guy that she thought he was.

In I Do, I Do, I Do, Autumn and Antonio’s characters are engaged. But, they are not really right for you. In a sort of Hallmark Groundhog’s Day, she relives her disastrous wedding day, over and over and over again. That is, until she meets Mr. Right.

Don’t forget to watch the premiere of A Glenbrooke Christmas, on Saturday, December 12, at 10 p.m., Eastern, on Hallmark Movies & Mysteries.