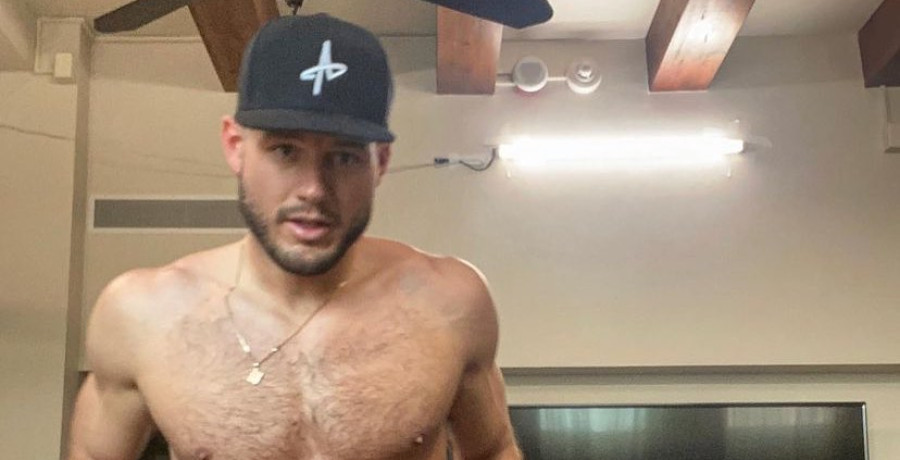 It’s been almost a month since Colton Underwood shocked the world by announcing that he was gay. That admission came after YEARS of rumors and speculation. He revealed his life-changing acceptance during an interview with Robin Roberts on Good Morning America. Now he’s back with another shocking revelation. Colton Underwood confesses to trolling for men. The timing of his activity on the dating app is sure to raise eyebrows.

Colton Underwood made waves during his time as a contestant on The Bachelorette. He told Becca Kufrin that he was a virgin. The “Virgin Bachelor” became the theme when he was chosen as the next Bachelor.

As he discussed on the reality show, his virginity raised questions about his sexuality, especially in locker rooms. The former pro football player always laughed off the innuendo.

The questions were seemingly silenced in 2018 when he chose Cassie Randolph at the end of The Bachelor. The two dated for almost two years before they amicably split in early 2020. But later that year, the split took a dark turn when Randolph filed for a restraining order, accusing her ex of stalking her.

The restraining order was dismissed a month later for unknown reasons. Underwood briefly addressed the relationship in a new interview with Variety. He said that after the break-up, he spiraled from the knowledge that it would be his last straight relationship.

He publicly came out on GMA last month.

Colton Underwood Admits to Trolling Grindr For Hookups – When?

During his GMA interview, Colton Underwood said he knew he was gay at at a young age but refused to accept it. In a shocking twist, he now says that he dabbled on the gay dating app Grindr long before he came out.

In fact, the timing of his dating app is sure to rile people. According to Underwood, he was on Grindr in “2016 or 2017.” Becca Kufrin’s season of The Bachelorette was in 2018.

That means that he was trolling for gay men before he appeared on three different shows looking for romance as a straight man. While Underwood calls the dates “hookups,” he wants to make it “very clear” that he isn’t referring to s*x. He doesn’t give details about the extent of his experimenting with men prior to The Bachelorette.

But It Wasn’t a Grindr Date Who Outed Him

Colton Underwood told Variety that he used an alias on Grindr. However, once he became famous on reality TV, he was worried about being outed by his former dates. He also said he felt “guilty” for the hookups. His hope in agreeing to compete on The Bachelorette was that he could “be straight.”

While none of his Grindr dates ever went public, he was outed. During his appearance on GMA, he said coming out stemmed from self-reflecting during the pandemic.

But in a new piece with Variety, he claims that he was blackmailed into announcing that he was gay. An anonymous person threatened to release incriminating photos of a Colton Underwood at a gay spa last year.

After consulting with his publicist, he felt the best course of action was to come out. His publicist also pitched a documentary-style show to Netflix about Underwood’s coming out experience. According to the article, that will hit the streaming service later this year.

Assuming the petition to cancel it doesn’t pick up traction again with Underwood’s latest bombshell.

Did it surprise you to know that Colton Underwood was trolling Grindr for men shortly before joining Becca Kufrin’s season of The Bachelorette? Do you plan to watch his upcoming Netflix show? Share your thoughts in the comments below.