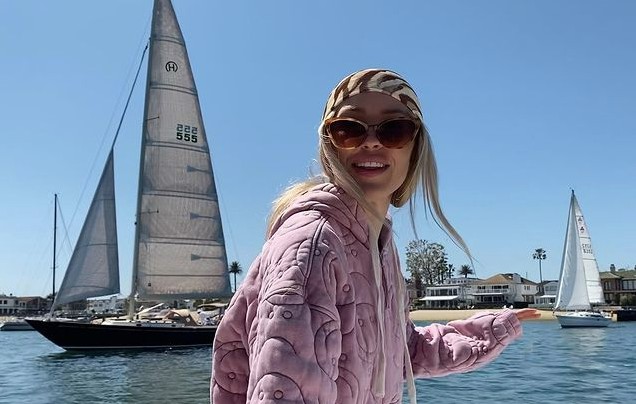 Cassie Randolph has kept fairly quiet recently. She had a tough time following her split from former Bachelor Colton Underwood. Following their split he proceeded to stalk her, leaving her no choice but to file legal charges. A restraining order was granted against Colton. However, later the charges were dropped when Colton and Cassie reached a private agreement outside of court. Now, several months later, Cassie is reportedly happy and dating. While she is processing the news that Colton is gay, she’s also living her best life.

Cassie Randolph hangs out with rumored boyfriend and family

E! News shared all about Cassie and her new man hanging out with her family. Sources close to the situation say Cassie is happy and moving on. Her relationship with rumored boyfriend, Brighton Reinhardt, is going great.

Cassie and Brighton were seen in Shorebreak Hotel in Huntington Beach this past week. They were with her family including her sister Michelle and her boyfriend, Runaways actor Gregg Sulkin.

The source went on to say, “Cassie and Brighton have been seeing each other since the beginning of the year.” They continued, “They recently have become more serious and are dating. Cassie has been really focusing on her school and work transition this year and Brighton has been a huge support system for her.”

Brighton is reportedly helping her get through the past ordeals with Colton. The source said, “After last years events with Colton, she feels she is in a really stable and healthy relationship.” They continue, “Things are going well and her family likes him a lot. They like to do low key things and love to be by the beach and cook at home. Cassie is really happy and in a good place.”

She doesn’t have a lot to say in regards to learning her ex-boyfriend is gay. Cassie did not know the story was being announced on Good Morning America prior to live event. Sources said she was processing it all and didn’t have a comment.

While it seemed she may never mention it, she did thank fans without directly mentioning Colton’s name. She said, “Before I get into anything, I just wanted to say thank you so much for all the kind comments and messages from you guys.” Cassie continued, “I really appreciate it regarding the topic in the media that brought my name up this week. Just want to let you know that I’m not going to be further discussing it or commenting on it for now.”

Meri Brown’s Best Friend Jen Ends Up With Egg On Her Face
Bill Gates As ‘The Bachelor’? Fans Propose Spinoff Contestant
‘Below Deck Med’ Bugsy Supports Hannah Amid Capt Sandy Feud
‘When Calls The Heart’ Photos Are Spoilers For Season 8 Finale
Meri Brown Says She Needs To Sharpen The Knife