It looks like it will be a busy year for the Bates family when it comes to weddings! Carlin Bates hosted a Q&A session on her Instagram stories and answered her followers’ questions. Lots of different topics came up, but one fan wanted to know about the upcoming weddings in the family. The fan asked, “How many Bates weddings do you think will be this year?”

In response, Carlin holds up two fingers and writes, “I’m guessing 2… we shall see.” She also adds a crossed fingers emoji, so maybe she’s hoping for another wedding.

Weddings are a big deal, so it’s possible that these two weddings will be featured on UPtv’s Bringing Up Bates. At this point, it’s probably too late to fit them into the current season. So, they could be special standalone episodes or added to the next season of the show if it’s renewed again.

Which Bates weddings will happen this year?

In her response, Carlin doesn’t share too many details. So far, only one of the kids is engaged. Katie Bates and Travis Clark announced their engagement in April, and they are already making plans for their wedding. Alyssa Bates revealed that the couple has selected a wedding date, but she promised not to share any details until they do. 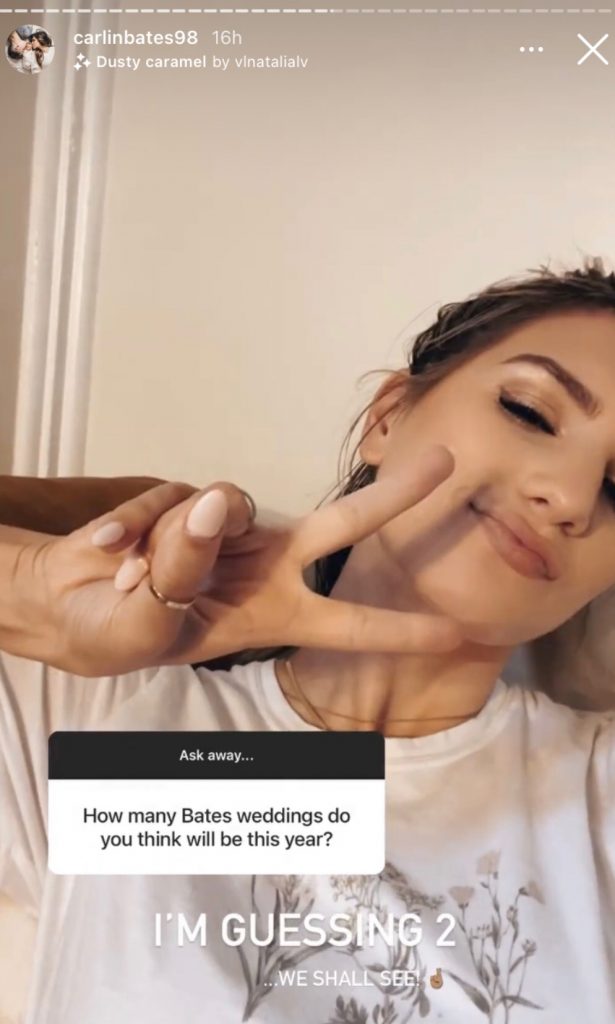 Katie and Travis aren’t the only ones in a serious relationship though. Lawson Bates is currently courting Tiffany Espensen. The pair has been talking for seven months. They recently joked about closing on a house, but it wouldn’t surprise fans if that happens soon.

It’s also possible that Nathan and his girlfriend Esther Keyes will be getting married soon. She’s making her debut on Bringing Up Bates soon, so an engagement announcement could follow. For months, fans have been speculating that the two are engaged. At this point, they haven’t shared that news publicly, so we don’t know for sure. They may have kept it a secret due to the show.

Fans seem to think these two weddings are Katie’s and Nathan’s. It’s possible that Lawson will pop the question soon too, but he may not do it soon enough to squeeze a third wedding into 2021.

So, who do you think will get married this year? Do you think Katie and Travis, as well as Nathan and Esther, will be the ones to get married? Let us know in the comments below.

For more Bringing Up Bates updates, check back with TV Shows Ace.