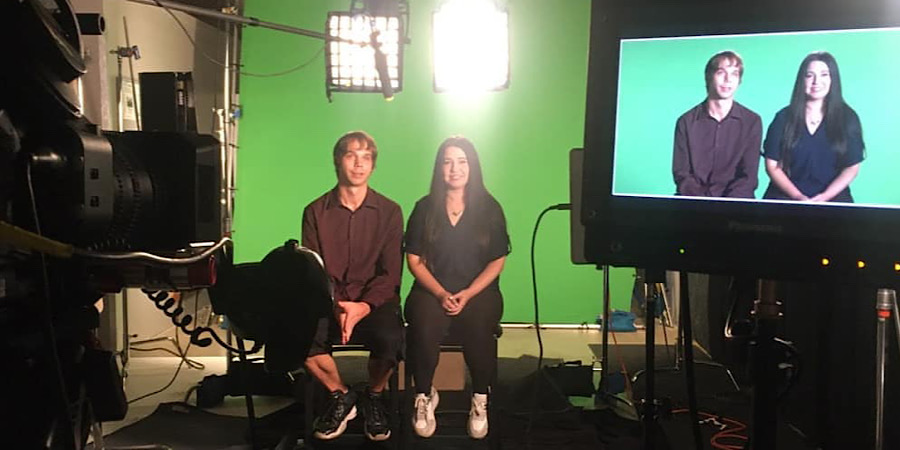 Last week on Return To Amish, Ada took Rosanna and Maureen to the beach for a girl’s day. They had never felt sand or seen the ocean before. She then arranged for them to go parasailing which was an extreme adventure. Jeremiah and Carmela traveled to Ohio so he could meet his biological father, Dennis. Both were immediately welcomed by him and he explained Jeremiah had been kept a secret from him for years. It wasn’t until Jeremiah’s siblings told Dennis he had a son that he went looking. Everyone threw Sabrina a baby shower but an unexpected guest threatened the fun.

Viewers may remember Matt from his time on the series in years past. He dated Sabrina prior to coming out and may have hooked up with Jethro. Jeremiah is aware of this and cannot help but chuckle when he arrives at the baby shower. Jethro takes their son inside and Sabrina says it is hot so she follows as Jeremiah pulls Matt aside. He proceeds to say he has no judgment but wants the tea on him and Jethro. Jeremiah has heard the rumors and wants to know if Jethro and Matt have hooked up in the past.

Sabrina is livid at Jeremiah for pulling Matt aside and he neither confirms nor denies the rumors. He simply shares he has someone else he is with and is happy. She goes to see Jethro and addresses the rumor to which he says it never got intimate. Sabrina apologizes for telling anyone and claims she was high at the time but Jethro is still upset. She acknowledges he cheated on her so many times prior to rehab but it is all in the past.

Ada goes to Jeremiah to see what is going on and he tells her. She cannot understand why this makes him so happy and she has never seen him so giddy. Jeremiah finds it so rude that Jethro and Sabrina won’t acknowledge Matt now he is there. He wants a resolution which he does not feel he will get. Jethro was initially going to propose to Sabrina at the shower and that is all on hold for now.

Maureen Is In Love and Dealing With Jethro

At night, Maureen steals Grandma Ada’s phone so she can call Daniel back home. Rosanna claims she does this every single night. Their late-night conversations have turned intimate and quite vulgar, interesting for a pure girl new to the English world. Rosanna can hear them on the phone and says it sounds like something from the barn, animal noises. She is truly freaked out by this new love connection.

The next morning, Jeremiah, Ada, and Carmela address Jethro and his behavior. Jeremiah shares the rumors he had heard and he neither confirms nor denies them. He says he was a different person two to three years ago but rehab truly rehabilitated him. Ada does not want to talk about his past if he is truly a new person. Jeremiah almost hates to admit he’s starting to like Jethro now and respects his honesty.

Ada Introduces the Girls to Her Business on Return To Amish

It is time to go to work for the ladies since Ada had to move her business from Pennsylvania to Florida due to Covid. For Maureen and Rosanna, it is their first time cleaning a home and this one is spotless and impeccable, the kind Ada despises. The owner, Heidi asks if they know how to use a washing machine which they don’t so she has to show them. It’ll be quite the switch from teaching for Maureen. The girls are fascinated by the perfumes and shoes Heidi has because it’s so elaborate.

Everything is so out of the box and fancy so they start trying on the shoes and jewelry. Of course, Heidi catches them wearing her necklaces and is peeved. She asks them to leave the closet and Ada comes upstairs to discipline the girls. Heidi realizes these girls are so deprived in their typical lives so she asks if they at least had fun and they say yes. She asks if they would like to go out with her stepdaughter and her friends. It is time they experience life away from the home so she asks if they have ever had sushi. She mentions California rolls and they say they’ve never been to California but want to go. This will be an experience.

DNA, Dennis, and The Girls Get Sushi

Ever since Jeremiah learned who his biological father was, he was hoping he would feel an immediate connection. That still has not happened despite traveling to Ohio with Carmela to meet Dennis. He really wants to ask him for a DNA test so he can establish paternity. It did not come up when they first met but now, he and Carmela are headed back to Ohio to ask about it. Dennis has been making a real effort to establish some sort of relationship but there is one more step that needs to be taken.

Speaking of relationships, Rosanna and Maureen are looking forward to a new one with Heidi’s stepdaughter and her friends. They need to meet people their age so they head to sushi. Unfortunately, the stepdaughter could not make it but her friends still welcomed the girls. There are a lot of questions coming at them but they handle them very well. It is clear, however, that Rosanna has not gotten the same education as the typical teenager. She asks about a boy named Javier and his ethnicity. Maureen starts to feel they are making fun of them and their intellect.

They ask how far the girls went in school especially after Maureen mentions she was a schoolteacher. But both stay and let the friends order a variety of sushi for them. Maureen says she feels like puking after trying it and says she hates sushi. They gag after trying wasabi yet they did try it and everyone is proud of them for stepping outside the box. One of the girls offers to take them thrift shopping so there is hope the friendship will remain.

Sabrina is freaking out because she has not really felt the baby move the whole day so she wants to go to the hospital. Jethro is not being cooperative and it is irritating her to no end. Sabrina has never been away from her son overnight and feels he saved her life so this is a huge deal. Jethro takes her to the hospital but when they get there, he is not allowed to come in. If she were to go into active labor, he would be able to join her and it’s because of the pandemic so he waits in the parking lot.

Carmela likes watching Jeremiah with the little boy because it brings out a softer side of him. She is also a little jealous as they tried IVF and it did not work. They are hopeful to try again. Jeremiah is also hopeful Dennis is his real father but it is lacking. So they need to do the DNA test and Carmela needs this test, as well. Jeremiah has so many walls built up and hopefully, they can come down soon.

In the hospital, it is discovered Sabrina was having contractions and she did not know it. Jethro was able to finally join her which made them both happy. Ultimately, she has to have a C-section and Jethro gets all suited up, ready for his daughter to arrive. When Sabrina learns she won’t be able to hold her son during her recovery, she starts to panic and that is where it ends. Next week, Dennis and Jeremiah do the DNA test and receive the results. Rosanna tires of hearing Maureen talk about Daniel. Sabrina finally gives birth to her daughter. Catch Return To Amish Monday nights at 9 pm on TLC.