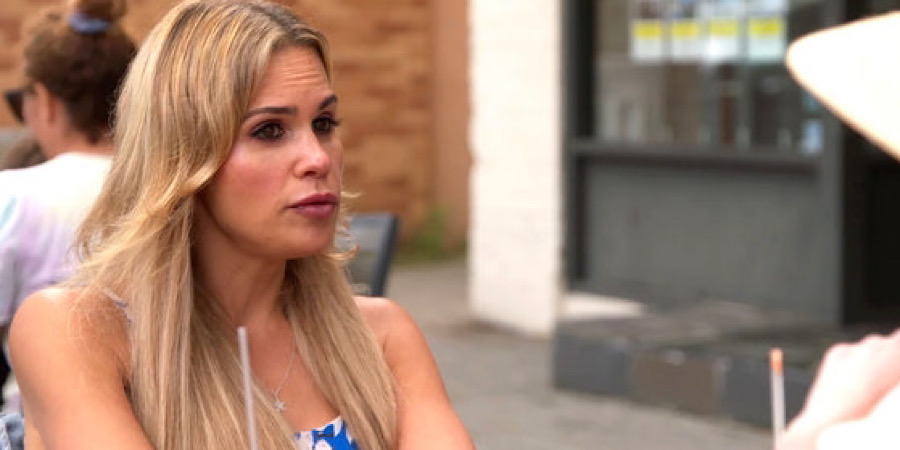 Last week on RHONJ, the ladies continued their time in Lake George. It included a prank on Joe where Teresa said Melissa was flirting with another guy. At the same time, Jennifer revealed to Dolores she heard some shady stuff from Teresa’s realtor. At Evan’s birthday, the realtor, Michelle claimed Joe Gorga owed her husband thousands of dollars. Jennifer and Melissa just got to a good place so she does not know if she should tell her or stay quiet. Teresa still won’t stop bad-mouthing Jackie and cannot let the situation go. What will happen when the ladies return home?

Boys Night on RHONJ and the Mommy Stealer

Margaret calls her husband Joe to check in and see how everything is going back home. He tells her they had a guy’s night but Evan did not come. She asks if the men discussed the rumor at all and he says no but that is a lie. It shows them chatting about it and Frank asking exactly what was said. Marge’s husband chimed in and said he had heard the rumors, as well. But he would never tell this to his wife.

The other ladies are outside having breakfast while Teresa is showing off Tony the Pool Boy’s social media. Everyone thinks she has a thing for him but she denies it. Out of the blue, she calls him and tells him she likes the photo. She reveals daughter, Audriana called him a “mommy stealer”. After she hangs up, Marge says the guys went out and then Teresa brings up Jackie again. No one even brought her up but she somehow finds a way. She says it is a good thing Jackie is not there or she would have “drownded” her.

Dolores asks Jennifer if she will ever tell Melissa what Michelle told her. She says when the time is right and they are off to the lake. But Jennifer has to call Melissa an ice princess in the confessional after seeing her on the lake. Everyone asks Teresa about Tony but they all grew up with him so she does not want to travel down that avenue again.

Jennifer Has THE Talk With Melissa

When everyone goes back to the house, Jennifer asks Melissa to stay behind. She shares with her what Michelle said at the party. It was a Growing With Gorga event and Joe was supposed to split the profits with Michelle’s husband upwards of tens of thousands of dollars. This never happened. Melissa is beyond shocked. Jennifer is surprised she did not flip out but she says she does not shoot the messenger.

They share what happened with the ladies and they ask Jennifer if she had spoken to Michelle prior to meeting her that night. She said Michelle had been helping her find a shore home so she was not a complete stranger. They also wonder if it bothers Teresa that this woman is talking poorly about her brother. She seemingly does not care and actually believes what her realtor has to say. For her, she has seen men do things behind her back so it would be bo big surprise.

Melissa goes to call her husband who vehemently denies the claims. Joe says the husband saw how successful the Gorgas could be and wanted to further profit from it. Everyone is shocked Teresa brings around crazy people. And she never defends her brother no matter what. She claims she will handle it when she sees Michelle next but she is a great agent so there is that.

It is the last night at the Lake George home so they have a beautifully catered dinner. They ask Teresa if she has considered online dating but she says no. Mainly because it would be all over the press. The ladies say they have had time to read and that is a segway into Marge’s big reveal. She has gotten a book deal. It will explore her life and she goes onto share about a time she was intimate with an older boss.

Jennifer gets very judgmental in her confessional about it but Marge wants women to learn from her mistakes. They are celebrating the trip when Teresa brings Jackie up again. Jennifer believes she is beating a dead horse. Dolores asks if she did not bring up Gia if she would then call Evan. Teresa still believes she deserves an apology which she will never get.

Back home, Marge and Jackie meet up to chat. Margaret says everyone missed her but Jackie says it was best she did not go. Jackie feels Teresa should have just pulled her aside if she really felt she needed to know. Margaret tries to defend Teresa by saying she is unfiltered and this was not pre-calculated to which Jackie asks if she’s really that gullible. She has to remind Marge of when Teresa staged Danielle pulling Marge’s hair. She is calculated. Jackie is not over it until Evan feels better so they are doing a birthday redo with the good friends.

It is time to sell Teresa’s home so her agent, Michelle is over. Of course, Bravo includes a ton of flashbacks throughout all of the seasons to tug at the heartstrings. Teresa asks Michelle if she can talk to her outside quickly and says she is getting cold feet about selling. But she shares about the Jennifer conversation and asks why she did not talk straight to Joe. Michelle claims Jennifer asked what she thought about Melissa but it shows a much more casual conversation. Teresa says she can not list her home with her until the men talk and clear it up.

It is time for Evan’s birthday do-over and everyone is getting ready for it. David is not coming so Frank will be Dolores’ plus one. As for Teresa, she is not invited but Jennifer will still defend her. The same goes for Joe Gorga. He will always defend his sister even if she does not always have his back. Jackie is just really focused on making sure Evan forgets his big party but by bringing it up over and over, it is still there.

As soon as Joe and Melissa arrive, Jackie addresses the Gia analogy and says she never meant anything by it. Joe still is defending his sister but admits he sounds like an idiot. He says his dad told him to protect his sister so that is what he was doing. Jennifer defends Teresa, as well and Jackie is over it. The guys are talking about it and Frank doesn’t care, he just wants to see the Goldschneider’s happy.