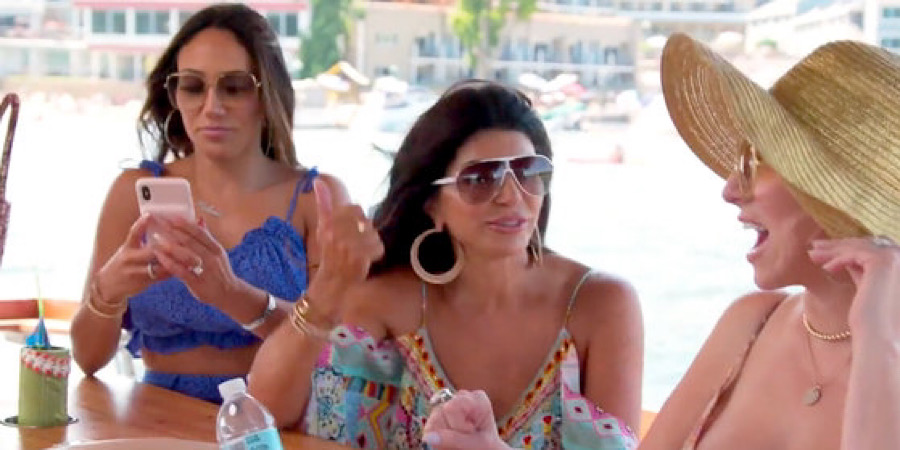 On last week’s episode of RHONJ (Real Housewives of New Jersey), Teresa refused to admit she was wrong by spreading a rumor that Jackie’s husband was cheating. Even after her daughter Gia told her she needed to apologize, Teresa still could not let it go. Jackie chose not to go to Lake George with the ladies and to stay home. Still, her presence was felt on the ladies’ trip. The women, especially Jennifer, are fascinated by Dolores’ relationship with her boyfriend, David. It’s very non-committal and Dolores’ ex-husband even has some issues with him. He says he’s a great doctor but a crummy boyfriend. Tonight, the trip continues and Melissa flirts with a new man.

Can the RHONJ Ladies Find a Resolution?

Margaret is on the phone with her husband and she is explaining how hard finding a resolution is. If Teresa wants Jackie to let it go then she has to do the same. But she still cannot believe Teresa sunk so low as to spread a rumor about Evan at his own birthday party. Melissa cooked breakfast for everyone and Teresa comes downstairs. Marge says she misses Jackie and feels bad. Teresa says she won’t call her because she has already apologized. She only said she was wrong to say it at the party which is not a real apology.

Melissa says they are beating a dead horse and need to stop talking about it. Time to get ready for lunch on the water. On the way, the ladies are chatting about how their husbands will be getting together. But none of the men can keep up with Joey Gorga and how much he drinks.

During lunch, Teresa’s realtor calls to chat about when they can put her home on the market. It is very hard because there are so many memories in that house. It then moves to the kids going back to school and how will they do it during Covid times. Melissa starts talking about how her daughter just turned fifteen and has a boyfriend. She can not imagine Antonia ever losing her virginity and Marge is the only one who’s open about her age. The others clam up.

Melissa feels great being away from her kids since they have been attached to her hip since quarantine started. They continue to discuss if they have trust issues with their husbands. Jennifer says she is fine with Bill going out as long as he texts her. Melissa just wants Joe to be honest and not lie.

After lunch, they go onto a tiki boat for day drinks and dancing. Dolores decides she wants to prank Joe on behalf of Melissa. He was at a strip club once with Teresa and his wife found out so she texted him and asked where he was. He said he was with his sister but did not want to be honest about his exact location. To get him back, Dolores told Teresa to text him that Melissa got the number of a restaurant owner and they’d been texting all day. She did this and now, Joey is mad.

Joe asks Teresa to call her and she is very descriptive about what “happened” between Melissa and the owner. They are blown away by how well Teresa can lie and Joe starts speaking in Italian to her. This means he really believes her. Eventually, they tell him it’s a prank. By the time they get to the van to go home, everyone is passed out and stumbling.

Melissa calls Joe and they laugh over the prank that was pulled. In the other room, Dolores and Jennifer are talking about Teresa’s realtor. She got along really well with Jennifer at the birthday party but apparently, she shared that Joe Gorga owed her husband money. This is not the first time the women have heard he has dropped the ball with payments. Should they tell Melissa? She and Jennifer are finally getting along so it might not be worth it.

At the Gorgas’, the guys have gathered and Joe tells them about his wife cheating on him. He then tells them he was punked. They start to ask what the fight between Jackie and Teresa was really about. Marge’s husband, Joe says he has heard Evan’s been unfaithful. But the men all take a vote and conclude he was faithful to Jackie all the time. In Lake George, the women decide to stay home and order sushi.

Teresa and Marge call Jackie to see how she is and she says Evan wants her to call him and apologize. Also, they want her to clear his name. This will never happen.

Teresa Is Going To Blow Her “Casket”

At dinner, Margaret and Melissa tell Teresa what Jackie and Evan want. Teresa is never going to do that. She says she did not make up the rumor, it was something she heard. Teresa says she was laughing when people claimed her husband was cheating on her. Last week, during flashbacks it showed how she erupted hearing those rumors. She cannot let go that Jackie made an analogy about Gia and even Gia said her mom should apologize.

Teresa gets so mad, she says she is going to blow a “casket.” The ladies all laugh at her malapropism. Teresa soon goes off and says she is tired of talking about Jackie and decides she will leave. Melissa goes to talk to her but she does not want to talk to anyone. Jennifer says it does not matter anymore because no one can change Teresa’s mind. They tried to get Teresa to see the light and Jackie needs to move on so they can be together or it’s over. The ladies go outside to make s’mores and are laughing and it’s all good again.

Next time, the ladies try water sports and talk about inappropriate advances. Jennifer shares the news with Melissa about her husband. Jackie and Evan reevaluate their friendships. It all goes down on RHONJ Wednesday nights at 9 pm only on Bravo.