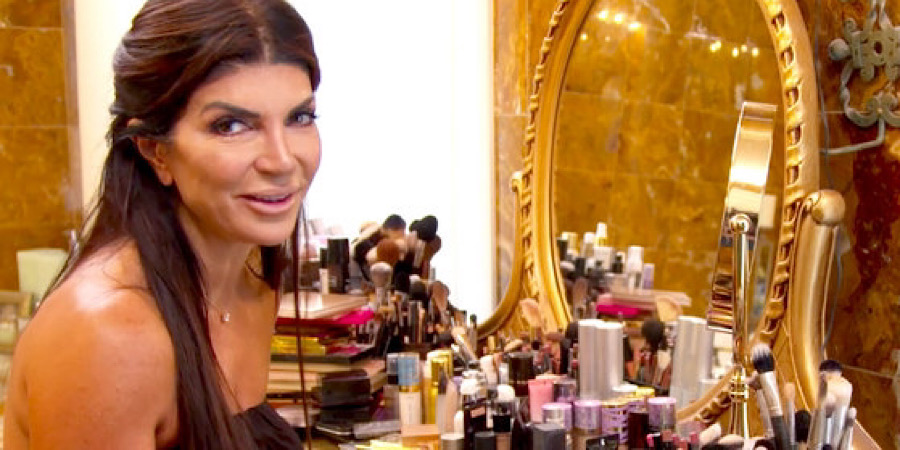 Melissa Gorga is not the only RHONJ housewife on the move. Fellow housewife and SIL, Teresa Giudice is also selling her home. This is the home she shared with ex-husband, Joe and was heavily featured on the hit Bravo series. But, the price was a little high for prospective buyers so Teresa ultimately had to slash it. Can you really put a price tag on memories?

Shortly before viewers were introduced to Teresa and Joe Giudice on RHONJ, their dream home was finalized. The couple first started building the home in 2002, three years after they wed. Purchased for a little over half of a million dollars, the Giudice’s chose to custom build their dream home over six years. By 2008, it was ready and by 2009, Teresa became a household name, flipping tables during fights. But, the home was perfect for hosting holidays and raising a family. She and Joe had four daughters: Gia, Audriana, Gabriella, and Milania. But, it was not always perfect.

The same year the RHONJ debuted, the couple filed for bankruptcy. Then, in 2013, the couple was charged with multiple counts of fraud. Teresa spent nearly a year in prison followed by Joe who went to prison followed by ICE. Not being a US citizen, he was set to be deported back to Italy but his family forced him to fight. Joe did it for as long as he could with as many appeals but eventually went back to Italy. On a filmed trip to visit him, Teresa told Joe she wanted to separate after almost twenty years of marriage.

Starting Over With A New Man and A New Home

With Teresa and Joe’s divorce finalized, rumors started to fly as to who she was dating. Since November, she has been dating digital marketer Luis Ruelas. The two became Instagram official in December and seem very happy. This new man goes hand-in-hand with Teresa’s new life. She tried to achieve newness with her current home by redecorating it. Interior designer Jimmy DeLaurentis told E!, “[Teresa] was like, ‘My house needs a lot of work, it’s dark, it’s filled with old Italian stuff, Joe is gone … I need to feel lighter in this house.’ It’s a huge house, everything was doom and gloom and dark, and she had memories of a lot of stuff and she just wanted to brighten it up.”

He also noted the house was a lot of upkeep. Teresa’s father used to live with the family but has since passed away. Additionally, eldest daughter, Gia is in college and Gabriella is 16 so she does not need all the space. After putting the six-bedroom, five-and-a-half-bathroom home on the market in September for 2.5 million dollars, it hasn’t gotten a bite. Thus, the entrepreneur had to lower the selling price to 2.25 million. Not a crazy cut but she is clearly ready to leave that life behind. SIL Melissa Gorga sold her home and looked happier than ever. These moves and life changes will be documented on the upcoming season of RHONJ. It starts on February 17 only on Bravo.