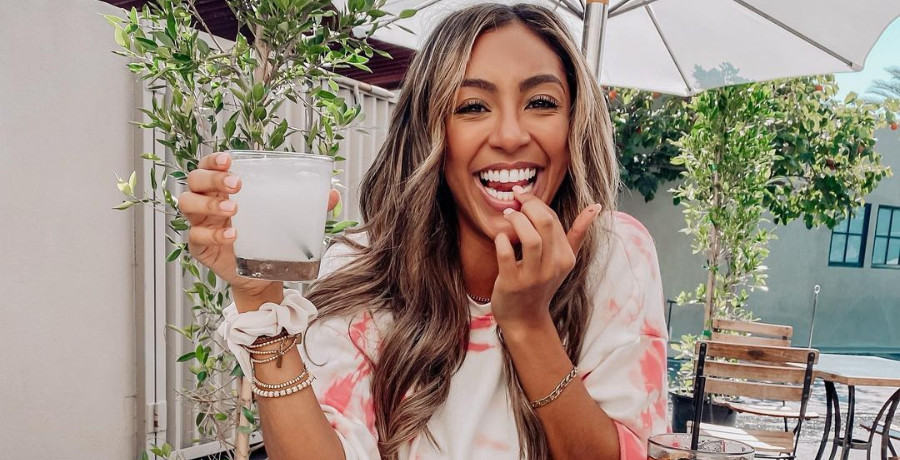 Tayshia Adams finally reunited with her podcast co-hosts for a much-needed night on the town. Joe Amabile, Natasha Parker and Tayshia met up in downtown Manhattan this week. As fans know, Tayshia lives part-time in NYC with her fiance, Zac Clark. She commutes between New York and California, where she keeps a second home.

In the comment section, Natasha Parker dropped a little nugget of insight into Tayshia’s personal life.

Eagle-eyed followers of the Click Bait podcast host may have noticed something interesting about the restaurant table. The drinks were all on one side of the table, in front of Joe and Natasha.

If fans didn’t notice, then Natasha hilariously pointed it out in the comments. She wrote that none of the “wine, beer and shot glasses” were on Tayshia’s side of the table. Natasha also revealed why. She wrote, “Tayshia [gave] up drinking this month.”

One Bachelor Nation fan praised Tayshia in the comments. They noted that she is exactly the kind of woman Zac Clark needs in his life. Zac is a recovering addict. He previously stated that he knew Tayshia was the one for him when she chose to not to drink alcohol during a toast on the show.

Is it a bad sign that Tayshia isn’t drinking alcohol at the moment?

Fans Speculate Why Tayshia is Sober

Tayshia Adams is quite diligent in her religious practices. During her season of The Bachelorette, she sent frontrunner Ivan Hall home due to their religious differences. Tayshia felt the difference in their beliefs made them incompatible as a couple.

In response to Natasha’s comment, several fans speculated why Tayshia might be off drinking for the month: Lent. One follower wrote that they also gave up alcohol in honor of Lent. According to Good Housekeeping, Lent began on February 17th.

If Lent is the reason why Tayshia isn’t drinking alcohol, she doesn’t have much longer to abstain. Lent ends on April 1, three days before Easter Sunday.

When the Bachelor Nation podcast Click Bait first started, Hannah Ann Sluss was a co-host with Tayshia and Joe. Hannah Ann was the “winner” of Peter Weber’s season of The Bachelor. Only to have Peter dump her for Madison Prewett.

One of Tayshia’s followers asked in the comments why Hannah Ann left the podcast. While Tayshia didn’t respond, another fan did. They suggested that Hannah Ann left because she wanted to focus on other opportunities.

As for Tayshia Adams and Zac Clark, they are still going strong. She recently praised her beau for building up her self-esteem.