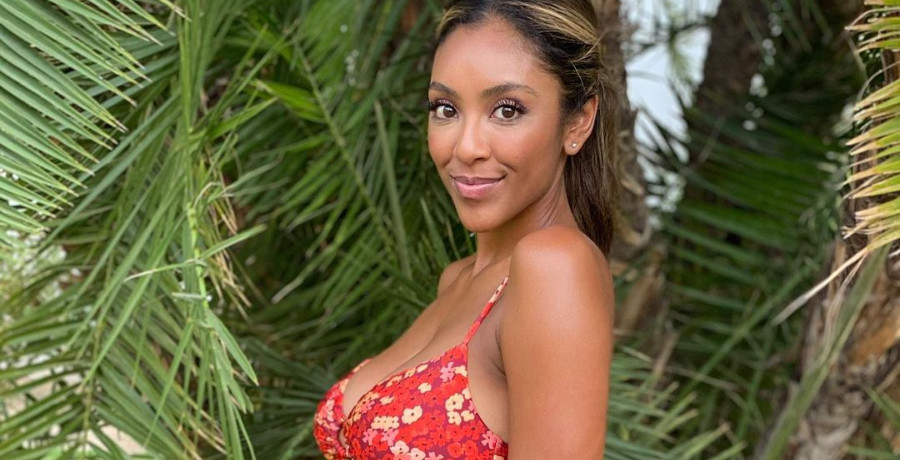 Tayshia Adams made her debut as The Bachelorette while Clare Crawley was still falling for Dale Moss. In a teaser clip promoting the switch-up, Tayshia exits a swimming pool wearing a very low-cut bikini.

That’s something she would never have imagined herself doing. In fact, she admits that she dresses more modestly in real life than she did on the ABC show. Yes, even Tayshia Adams suffers from body-image issues.

She hated one particular body part when she was growing up. How does she feel about her body now?

Like most people, Tayshia Adams had a difficult time going through puberty. She recently opened up to Women’s Health about her insecurities in a “Body Scan” feature interview. She’s asked to name what part of her body she’s grown to love. Tayshia immediately says, “My boobs.”

She shared a worry many young girls can relate to: “You don’t know how big they’re going to be, what they’re going to look like.” She admitted to worrying about how her clothes would be perceived, even if she didn’t intentionally dress sexy. Tayshia notes that bathing suits fit differently on her than on her friends.

Tayshia said it “sucks” to be insecure about her breasts for so long. But now she is more confident in her body. And she credits a lot of that to her appearance on The Bachelorette. She wanted her suitors to know they were “dealing with someone who’s confident…and is proud of who they are.”

That’s not to say she doesn’t still feel insecure sometimes. Luckily, she has Zac Clark to remind her that she has a bangin’ body.

At the end of Season 16 of The Bachelorette, Zac Clark proposed to Tayshia, and she accepted. The couple lives together when she’s in New York City. She also keeps a home in California. Her fiance reminds her often that he “loves every single thing” about her body, even her feet.

She reasons that if he loves everything about her, she should, too. Tayshia gives Zac credit for helping her stay confident.

What’s Next After The Bachelorette?

Tayshia Adams recently had a dream come true when she was featured in Marie Claire magazine. During the interview, she revealed that Zac Clark would have married her within weeks of getting engaged. However, she wanted to go slow. But now, she is the one who would marry him “next month.” Zac puts the brakes on those plans, but they do plan to wed eventually.

After appearing on several shows in the Bachelor Nation franchise, she would like to continue working in television. She told Marie Claire that she is pursuing “TV hosting” as a career. Could she take over for Chris Harrison while he is taking a break? That remains to be seen.

Watch the full “Body Scan” below. She also talks about the time she fractured her pelvis in a freak accident.

Is Bachelor Nation Ready For A Gay Lead?
‘The Young And The Restless’ Spoilers: Phyllis Vs. Sally
‘Days of Our Lives’ Spoilers: Ben Gets Desperate
HRH The Duke of Edinburgh Prince Philip Funeral Details, Harry And William Walk Apart
‘Sister Wives’ Maddie Brush Explains How Evie Is ‘Normal’