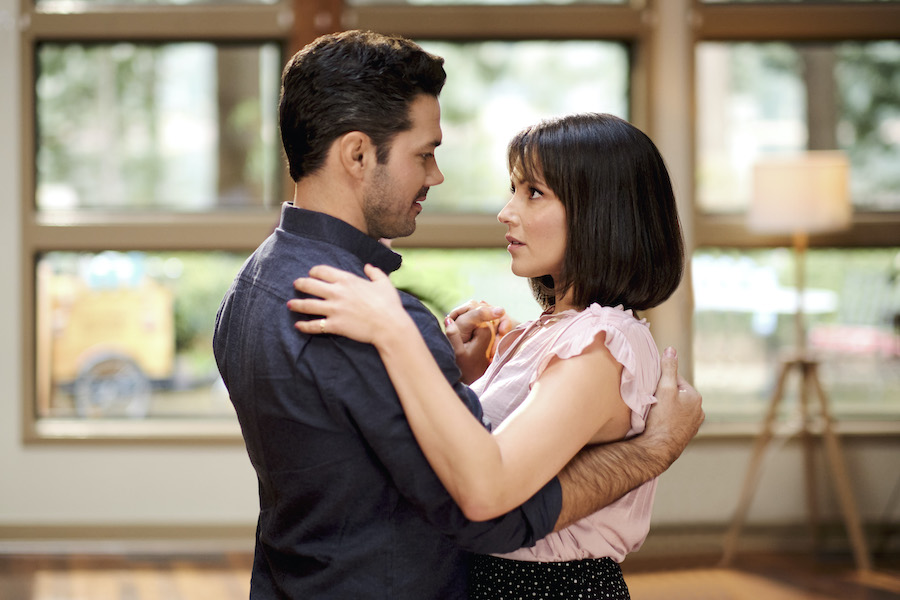 Ready for a Spring Fling? Hallmark’s Don’t Go Breaking My Heart is guaranteed to make you believe in love again. Starring Italia Ricci (Designated Survivor, Love in Winterland) and Ryan Paevey (General Hospital, A Timeless Christmas), this is a movie filled with romance and all the feels.

What Is Hallmark’s Don’t Go Breaking My Heart About?

According to the Hallmark press release, Miranda (Ricci) runs Breakup Boot Camp. She developed this program to help heal the recently broken-hearted. Moreover, her business venture is taking off.

In her latest group is Ben (Paevey), a journalist. He had his own recent breakup. However, he has made many declarations that he’s completely unaffected this. Instead, he is only going to this retreat in support of his sister.

Things between Ben and Miranda don’t start out too good. She thinks Ben is a tough nut to crack. However, she likes a challenge. She will get through to him. Yet, she does not know the whole story.

Turns out, Ben’s boss wants the truth about this growing business. He wants Ben to write an undercover exposé. Is this boot camp is the real deal or is Miranda giving people false hope.

As Ben attempts to dig deeper into Miranda’s world, she seizes the opportunity to break down his walls, The two bond. Both start to face some of the issues that plagued their previous relationships. Unfortunately, Miranda finds out the truth.  Moreover, the two lonely hearts are back to square one.

When Can You Watch Hallmark’s Don’t Go Breaking My Heart?

Moreover, be sure to hop on Twitter on premiere night. The stars of Don’t Go Breaking My Heart, Hallmark and other fans will be live-tweeting throughout the premiere. This is a fun way to stay connected to others who love these movies that focus on positivity.

Hallmark’s Spring Fling movies starts out with Chasing Waterfalls. Starring Cindy Busby (Marrying Mr. Darcy) and Christopher Russell (The Nature Of Love). Just one year ago, these two were paired up in Love In The Forecast. This premieres on Saturday, March 20, at 9 p.m. Eastern, on the Hallmark Channel.

Chasing Waterfalls is about an aspiring photographer Amy Atwater (Busby). Amy gets the break of her career when high-profile magazine Explorer Worldwide puts her on an assignment to shoot one of North America’s most fabled waterfalls – if she can prove it really exists, that is.

Moreover, as Amy spends her days hiking to remote areas to photograph the spectacular waterfalls, she is surprised to find herself falling for her rugged guide, Mark North (Russell), and bonding with his young daughter Kyra (Cassidy Nugent, The Angel Tree).

However, her work and their romance are at odds. Is there a way to make things work out?

Don’t forget to catch the premiere of  Hallmark’s Don’t Go Breaking My Heart on Saturday, March 27, at 9 p.m. Eastern, on the Hallmark Channel.

Kim Kardashian Receives Backlash For Hosting SNL
Chase Chrisley Wants To Move To The Bahamas: Would Todd Allow It?
‘LPBW’: Jeremy & Audrey Roloff Have Low-Key Wedding Anniversary – Is Their Marriage Okay?
Disney+ Day Is November 12, All The Good Stuff You Need To Know
Scott Disick Is No Longer Keeping Up With Any Of The Kardashians