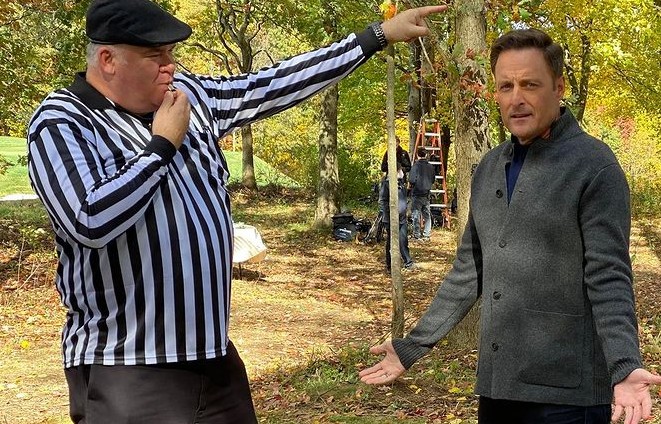 The drama off-screen surrounding The Bachelor continues to get intense amid racism accusations. Host Chris Harrison stepped down as host following a controversial interview with former Bachelorette Rachel Lindsay. He was reportedly defending Matt James contestant Rachael Kirkconnell. She has been accused of racist actions in her past, including attending an Old South Antebellum Ball. Producers are scrambling to find a replacement for Chris to host After the Final Rose. Now, reports are surfacing that they may have found their person. Two famous journalists remain in the running for the job. And, one popular Bachelor alum turned it down.

Chris Harrison’s future with The Bachelor franchise is still up in the air. He stepped down following racist accusations. Since then, drama has been surrounding the franchise. Fans appear to be divided on who is right and who is wrong. In fact, the hate Rachel Lindsay has received from the situation forced her to close her Instagram account yesterday. So, in the light of all the controversy, production is scrambling to find a suitable host for Matt James After the Final Rose special. They have reportedly pushed filming back a few days in order to find the best candidate for the job. With that said, two names are being thrown around as replacements.

First of all, reports from TMZ indicate Rachel Lindsay was the shows top pick to host After the Final Rose. However, Rachel reportedly turned it down. Many felt she would do great at discussing the issues at hand. Rachel did offer her top choice for the hosting duties. She publicly suggested they consider FS1 sports analyst Emmanuel Acho — who’s not only Black but also outspoken on issues of race.

No word if production is considering her suggestion. However, another big-time journalist has been suggested for the role. The New York Post says their sources indicate Michael Strahan is being sought out for the job. Insiders say Michael would bring a level of stability to the hosting role. The source says Michael is “the right mix of news and show business.”

There’s another journalist in the running for the role

Michael is one of production’s top choices. However, there is another journalist being considered. Good Morning America host Robin Roberts is also being considered. Of course, Michael and Robin are co-hosts on the morning talk show. The insider said Robin “would be an excellent choice to bring some gravitas and seriousness.”

Many believe it’s only a matter of time before the franchise announces Chris Harrison’s time as host of The Bachelor is ending for good. The divide goes both ways. Multiple fans want him gone. However, just as many, if not more, want him to resume hosting duties.

In the meantime, everyone knows production will hire a new host for After the Final Rose. No doubt after that Chris’s future will be decided quickly as The Bachelorette gets ready to film the latter part of March.

What do you think about Michael or Robin taking on hosting duties? You can watch Chris Harrison’s interview with Rachel that started the backlash below.