On Friday, PEOPLE gained access to an exclusive clip from the upcoming episode of TLC’s 1000-Lb. Sisters. The preview features details about Amy Slaton’s C-section, as well as the arrival of her “miracle” baby. Prior to his birth, she announced that his name is Gage Deon. The previous episode features Amy being in labor, but her baby isn’t due for five more weeks.

In the clip, she is in the hospital bed. At that point, she had seen her baby, but she hadn’t gotten to hold him yet. She gives an update on his health and says, “I just got out of [the] recovery room and Gage is in the nursery because his sugar was 24 — they want it at 50. So they’re giving him a little bit of formula, trying to get it up.”

She continues, “Gage was still in the breech position, so in the end, I had to have a c-section. And then they took him away to the nursery to get some tests run because he had low blood sugar, ’cause it dropped.”

The 1000-Lb. Sisters star shows her emotional side, saying, “When he started crying, I started crying. I already love Gage so much. This is a miracle.”

Later in the preview, Amy laughs, saying that the baby “came out mooning the doctor.” Then, she jokes, “I ask him if he farted,”

What do we know about 1000-Lb. Sisters star Amy Slaton’s baby?

Because of the show’s timeline and the agreement between Amy and TLC, she can’t yet share any details about the baby. Fans thought that there might be a photo of the baby that was accidentally leaked by Tammy. In reality, no pictures of him have been revealed yet. Once the new episode airs, Amy should be free to share photos of her son. 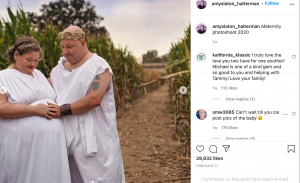 Though the couple cannot share photos of their son yet, they have been sharing photos from the maternity photoshoot. Both Michael and Amy are dressed in white. They’re wearing gold headbands and leather bracelets as they stand out in a cornfield. Amy has shared many photos from the shoot, and fans love them. Of course, fans are eager to get an update about the baby. They can’t wait to see photos of him.

So, will you be tuning in on Monday to watch the new episode? Share your thoughts about the preview for 1000-Lb. Sisters in the comments below.

For the latest on the Slaton sisters, check back with TV Shows Ace.