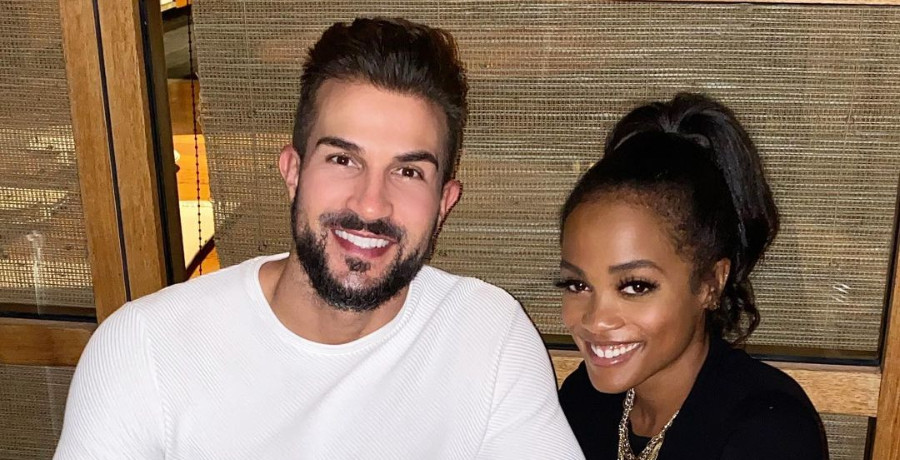 At the end of Season 13 of The Bachelorette, Rachel Lindsay chose Bryan Abasolo as the final rose recipient. The two tied the knot in the summer of 2019. Following her recent tense interview with Bachelor Nation host Chris Harrison, Abasolo is speaking up in his wife’s defense.

What Did Chris Harrison Do?

Chris Harrison appeared on the show Extra last week. Former Bachelorette Rachel Lindsay is a correspondent on the entertainment news show. Harrison was there to defend Bachelor Season 25 contestant Rachael Kirkconnell from allegations of racism. Specifically, he defended her attending an antebellum-themed party in 2018. His defense was her age and the “lens of 2021” not applying to 2018. He also slammed the “woke police” and cancel culture.

On her Higher Learning podcast, Lindsay claims that Harrison wasn’t upset about the interview until public outrage grew the next day. It was then that he issued his first apology. By the weekend, he had voluntarily “temporarily” stepped down from his franchise hosting job.

Bryan Abalso SLAMS Chris Harrison for Being ‘Disrespectful’ in Interview

A lot of former Bachelor Nation participants have spoken out in recent days condemning Chris Harrison’s comments. Season 16 Bachelorette Tayshia Adams reveals the “hurt” she felt by his comments. Even Hannah Brown, who has her own history of racially insensitive behavior, spoke out, saying the franchise needs to “do better.” However, there is one voice that hadn’t spoken up until Monday, Feb. 15.

Rachel Lindsay and her husband, Bryan Abasolo, were guests on former Bachelor contestant Mike Johnson’s Taking It Out podcast. During the podcast, Abasolo called Chris Harrison out for being “disrespectful” to Lindsay during the interview. Also, he said that he ”lost respect” for the long-time Bachelor host after the comments Harrison made on Extra.

While Bryan Abasolo thought Harrison’s comments were “hurtful,” he was mostly angry about the way Rachel Lindsay was treated. He echoed the sentiments many other Bachelor Nation stars have made in recent days – Lindsay is the glue that holds the franchise together.

Abasolo lifts his wife up by calling her “a pioneer” and “the realist” person from Bachelor Nation, per Us Weekly.

Chris Harrison is the ‘Figurehead,’ Do Others ‘at the Top’ Agree With His Stance?

The Bachelorette winner also questions how deep the racial insensitivity goes up the ladder. In fact, he rightly notes that Harrison is just the “figurehead” for the show. He doesn’t have any real power. Former contestant Sharleen Joynt wrote something similar in her blog post about the situation. She called Harrison’s leave of absence a “band-aid.”

Abasolo points out that the show was making strides by casting the first Black Bachelor in Matt James. However, Harrison’s comments ruined any progress made.

Do you agree with Bryan Abasolo’s assessment of the interview? Let us know in the comments down below.

Matt James’ journey to love continues every Monday on ABC.

Join our Bachelor/Bachelorette Facebook group to connect with other Bachelor Nation fans.