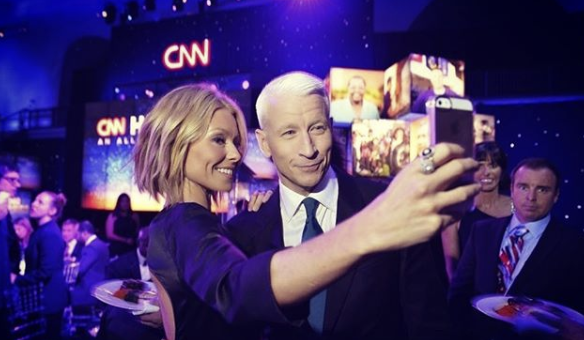 Live! with Kelly and Ryan fans were startled to find their favorite celebrity host missing from the show this morning. Instead, Katie Lowes from Scandal filled in and video chatted with Ryan Seacrest from her home. As the show began, Ryan informed fans that Kelly is fine. She’s simply taking a few days off for some much-needed vacation time.

“Kelly is on vacation and Katie is filling in at this very early hour on the West Coast,” said Ryan. We don’t know how long Kelly will be gone, but we hope she gets the rest she needs and deserves. The pandemic has been pretty draining on all of us.

The history of Kelly Ripa and Live!

Kelly Ripa teamed up with the late Regis Philbin for Live! with Regis and Kelly in 2001. The pair brightened our screens every morning until 2011 when Regis retired. Kelly hosted the show alone for a few years until Michael Strahan joined her from 2012-2016. Ryan Seacrest joined her in 2017 and is her co-host to this day.

Regis sadly passed away on July 24, aged 88. Kelly posted this tribute to her former co-host on her Instagram page:

We are beyond saddened to learn about the loss of Regis Philbin. He was the ultimate class act, bringing his laughter and joy into our homes everyday on Live for more than 23 years. We were beyond lucky to have him as a mentor in our careers and aspire everyday to fill his shoes on the show. We send our deepest love and condolences to his family and hope they can find some comfort in knowing he left the world a better place. – Kelly and Ryan

During the pandemic, Kelly and Ryan have been hosting the show virtually from the safety of their own homes. Many other talk show hosts are in the same boat. However, it’s not always going as smoothly as you might think.

On the June 2 show, Ryan Seacrest attempted a walking handstand that ended disastrously. Fans heard a crash offscreen. Seconds later, Ryan says he broke a candle and an ancient Mesopotamian artifact while attempting his stunt.

“Don’t try that at home,” the American Idol judge joked. We definitely all learned our lesson by watching Ryan’s failure.

However, not every show is a complete trainwreck. Kelly and Ryan recently saved a wedding that had been impacted by the pandemic.

Rasheda Patton and Anthony Presley originally planned to marry in beautiful St. Martin. However, once the coronavirus hit, their wedding dreams didn’t seem possible. Although their plans changed, Kelly and Ryan made sure their day was special anyway. They arranged for a virtual ceremony performed by journalist and talk show hostess, Tamron Hall.

Kelly and Ryan had more surprises in store for the couple. Calvin Richardson performed Can’t Let Go for the couple’s first dance. The wedding cake was a beautiful surprise baked by none other than Cake Boss star, Buddy Valastro. Kelly and Ryan also gifted the couple a luxurious honeymoon in the Dominican Republican, as soon as it is safe to travel again.

We’re sure some downtime is exactly what Kelly needs. What has been your favorite Live! episode so far? Share with us in the comments. Don’t forget to keep checking back with us to learn more about your favorite talk shows. We’re here to spread the news!