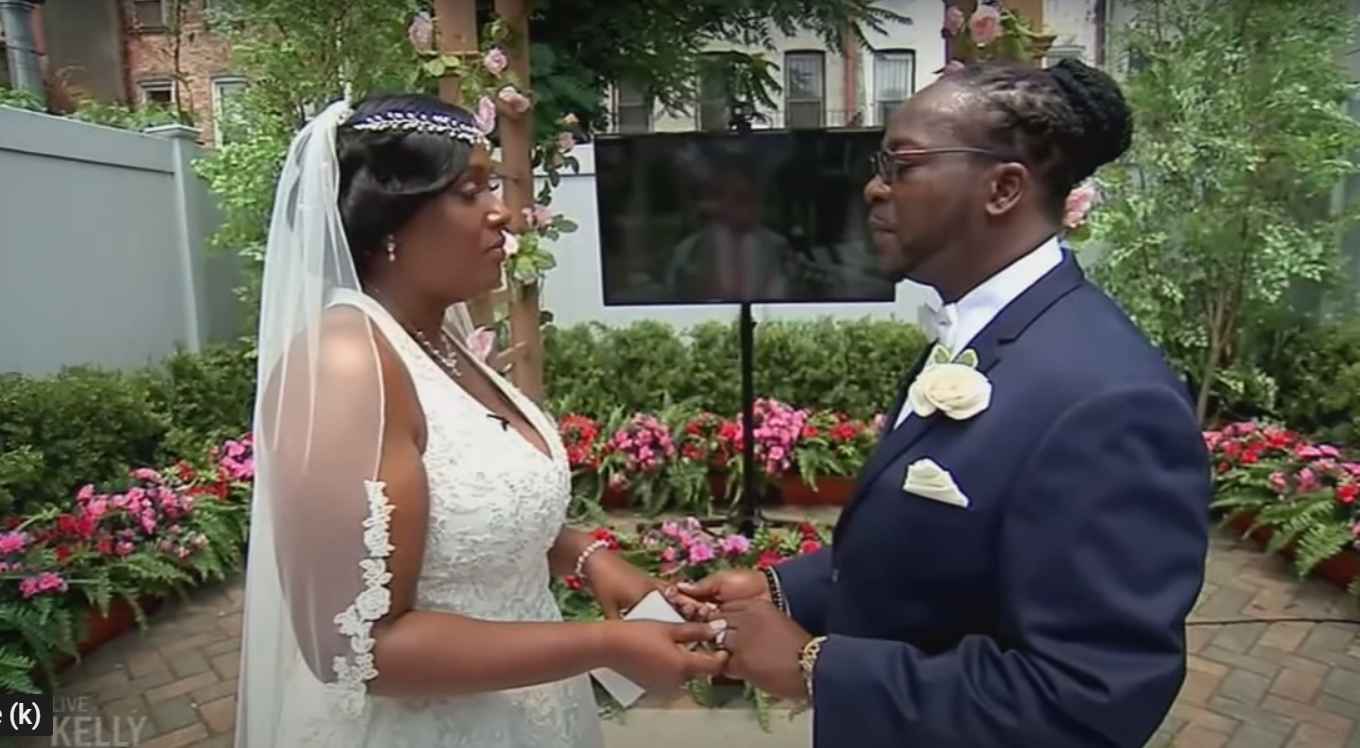 Rasheda Patton and Anthony Presley’s wedding on St. Martin was canceled due to the coronavirus pandemic. The Live With Kelly and Ryan hosts decided to help the two essential workers in New York City. They organized a virtual wedding for the lucky couple.

When Rasheda Patton and Anthony Presley’s dream St. Martin wedding was canceled, Kelly and Ryan came to the rescue. On Friday’s Live with Kelly and Ryan show, the morning talk hosts aired the wedding.

Tamron Hall agreed to be the officiant at Rasheda and Anthony’s wedding. Moreover, the couple’s big day started with a surprise announcement by Tamron. Hall, 49, spoke to Rasheda and Anthony in a video conference call before the wedding. She told them they are the second couple she will marry. Meanwhile, she added that this was good, as she’s “one for one.” Tamron continued by saying it is a huge honor for her to do this and she is “so excited.”

Surprise as Rasheda walks down the aisle

Rasheda told the cameras that she loves Joe. In fact, she noted that if you listen to the words of the song, “the lyrics are awesome.” Moreover, Patton added that originally, Anthony was supposed to sing that song to her as she walked the aisle. Now that he couldn’t do it, she would “just have to listen to Joe sing it.”

A small group of guests attended the wedding, wearing masks and seated six feet apart in line with social distancing measures in their backyard. In front of them, Rasheda and Anthony exchanged their own, self-written vows. The bride looked lovely in a white gown with a halter top neckline and a lace-trimmed veil. The groom looked strikingly handsome in his navy blue suit.

The newlyweds had another surprise following their wedding ceremony. This was as Calvin Richardson performed the song “Can’t Let Go” as they had their first dance together as husband and wife.

Next, the newlywed couple tucked into a three-tier wedding cake baked by Buddy Valastro, the Cake Boss star. Last, but definitely not least, Kelly and Ryan gifted Rasheda and Anthony an eight-day stay in a private luxury villa in the Dominican Republic. This will give the lucky couple a wonderful and luxurious honeymoon.

Speaking of the honeymoon gift, Ryan Seacrest said they wanted to ensure that when the time comes to travel, Rasheda and Anthony will be able to do it right.

How did Rasheda and Anthony meet?

As noted by People, Rasheda and Anthony met as the attended a class together as Bridge & Tunnel officers. Presley popped the question on Rasheda’s birthday while enjoying a family game night. The newlyweds spent more than a year planning their perfect dream wedding in St. Martin. They set a date for June this year.

However, as the coronavirus pandemic hit the United States in March, this put a stop to most air travel. The couple was forced to call off their dream wedding. Speaking of her virtual wedding, Rasheda said it was a “different kind of wedding.” While she said it was something they hadn’t planned on, it was still “pretty cool.”

The new Mrs. Presley then added that it has not only renewed their energy, but it has also renewed the energy of their friends and families.

Wishing Rasheda and Anthony Presley all the best in the future life and a great honeymoon in the Dominican Republic! Watch Live with Kelly and Ryan each morning on ABC.