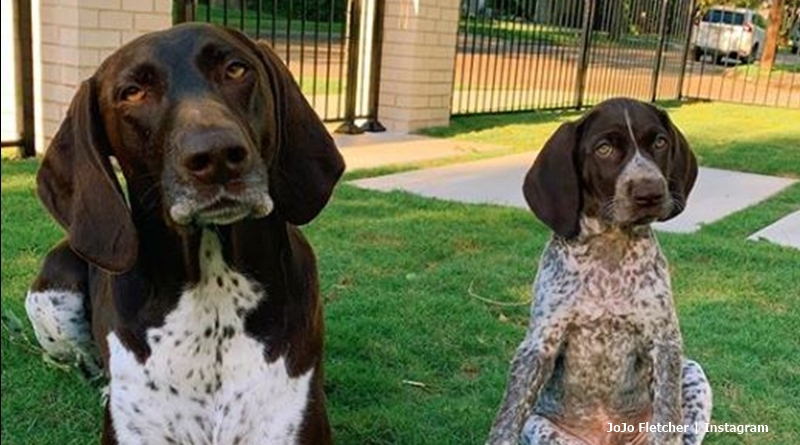 The Bachelorette alums, JoJo Fletcher and Jordan Rodgers got engaged back on Season 12 of the ABC show. They put off their wedding due to the coronavirus, but in the meantime, they celebrate the arrival of a new pup. They already share their home with Jackson, who’s of the same breed. Now a long-time member of their home, Jackson just got a little brother, Jagger. And, fans think he’s too adorable!

The coronavirus brings inconvenience to so many people across the world. And, celebrities also suffer the same as everyone else with the change of plans. TV Shows Ace reported in late March, that JoJo and Jordan already waited four years for a wedding. But, with time running out and bookings coming in, they decided to delay their wedding. Not sure if friends and family could make it, they finally conceded they’d move it to a better time.

Now, to brighten up their lives, a new pup arrived in their home. Jagger’s a charming-looking pup of the German Short-Haired Pointer breed. This breed tends to be extremely loyal, and sometimes develop a tendency to become a “one-person-dog.” So, a bit of doggie company’s a great idea for Jackson. Pet Guide notes if you want one just like The Bachelorette couple, its important to provide plenty of space to run around.

On Thursday, JoJo took to Instagram and shared a photo of Jagger and his new “sibling,” Jackson. Fans think the pup’s adorable and poured onto the comments to talk about him. One follower said, “These dogs are too lovely. We had one years ago and even as the tiniest pup, it would point. My poor doggie passed [away] at the age of 12 but so many treasured years together.” Another one commented jokingly, “Once I’m allowed to leave this house, I’m gonna steal that dog.”

It looks like Jagger and Jackson get along fine as well. When fans asked how Jackson took to a new dog, The Bachelorette star replied. She said, “he’s definitely still trying to figure out what this little guy is doing here LOL but we are making progress! Jagger already so in love with him though!” In time, probably Jackson learns to love his new doggie companion back. Who can resist such a cutie-pie?

Bachelor in Paradise stars, Dean Unglert and Caelynn Miller-Keyes adopted their foster dog, Pappy, recently. Plus, Colton Underwood also shared the news that he adopted his foster-fail, Zooka this week. Fans love it when celebrities adopt dogs, and they both earned plenty of praise on their social media.

What do you think of the new addition to The Bachelorette couple’s home? Do you think that Jagger’s simply adorable? Sound off in the comments below.

Remember to check back with TV Shows Ace often for more news about ABC’s The Bachelorette.