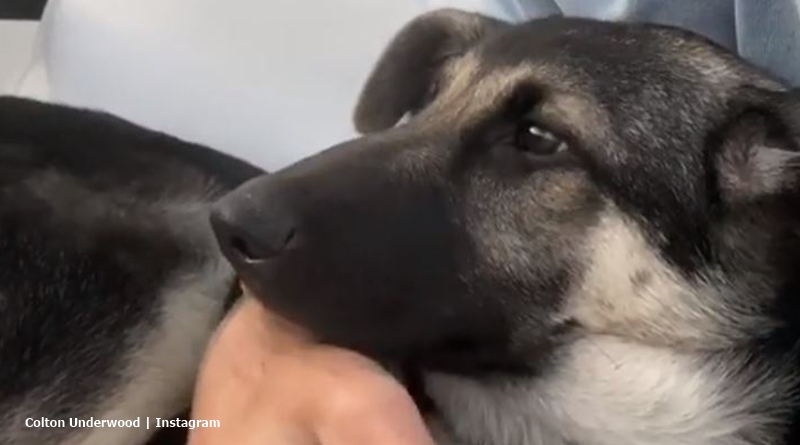 Taking to his Instagram on Wednesday, Colton told his fans that he adopted Zooka. He shared a lovely picture of himself with the pooch. In his caption, he said, “It’s official. You can call me a lot of things, but please add ‘foster fail’ to your list.” Then, he noted that he “officially adopted Zooka.” Zooka looks like a very sweet dog. And, Colton confirmed that. He described her as “classy, charming, and beautiful.” Plus, he noted her “big heart.” He believes her heart’s “bigger than her paws.” Zooka the dog really “won” him over. Then, he thanked the foundation who let him rescue his new dog.

Naturally, Bachelor fans turned out in their thousands and commented on the good news. One fan wrote, “Yes! So happy! 😍 Thank you so much for being such an amazing advocate for adopting and rescuing!” Then, another one commented about Colton’s old dog Sniper who passed away in February. They wrote, “Thank you for taking all the love you shared with sniper and paying it forward to another beautiful pup in need. YOU. ARE. AMAZING. 🙌🏼🙌🏼.” Actually, in his caption, Colton also noted that Sniper would “love” Zooka.

It’s official. You can call me a lot of things, but please add “foster fail” to your list. I’ve officially adopted Zooka. This classy, charming and beautiful girl has a heart bigger than her paws (and those things are huge!) and she won me over. Thank you to @thelabellefoundation for rescuing this sweet girl. Sniper would be proud… and in love ♥️

TV Shows Ace reported in late February, that Dean Unglert and Caleynn Miller-Keyes also failed as foster parents. They found Pappy, who looks remarkably like Yoda, in a shelter. The old doggie ended up stealing Dean’s heart as well. So fans rejoiced when they officially adopted Pappy, as well. Despite his health issues, Dean felt he deserved a loving home during his golden years.

These days, fans see Caleynn and Dean out and about on their adventures with Pappy. The Bachelor Nation fans love how happy the pup seems. In fact, on her birthday vlog for Dean, Caleynn even included Pappy in the video. Other reality TV stars also call out reminders that COVID-19’s a great time to adopt a dog. Even Joe Giudice from Bravo’s Real Housewives of New Jersey reached out from Italy about it. We reported that he made friends with a dog that barked all day long. Now, he takes it for long walks and they became fast friends. He reminded people to #adoptapet.

happy bday pappy! it’s not his actual bday but somehow this little shit convinced us to adopt him. it’s not what we wanted to do when we originally fostered him, but damnit he left us no choice. this old geezer comes with a laundry list of health complications so we decided to fill his waning years on earth with as much love as we possibly can. and it doesn’t hurt that he thrives in the van.

What do you think about The Bachelor alum, Colton Underwood adopting a dog? People reminds readers that initially, he thought he adopted a boy dog and named him “Bazooka.” So, when it turned out she’s a girl, he renamed her “Zooka.” Sound off in the comments below.