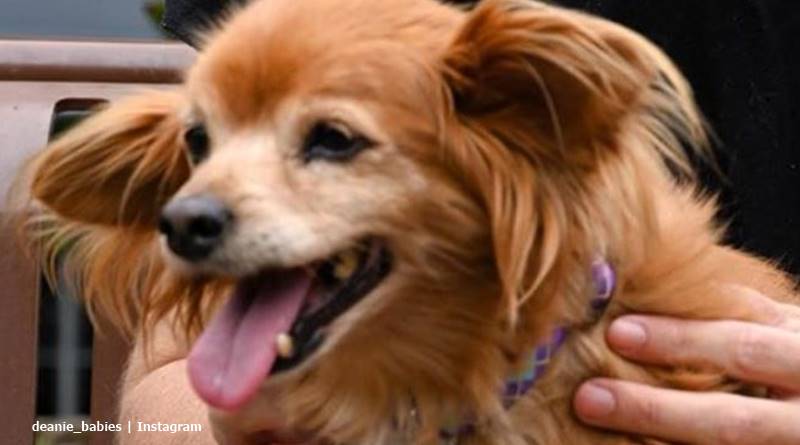 BIP fans heard about a week ago that Dean Unglert and Caelynn Miller-Keyes had a commitment ceremony. That news made fans very happy. Now, more good news comes from Dean on his Instagram. Pappy, the Yoda-lookalike dog they fostered, found his ‘furever’ home with Dean and Caelynn.

TV Shows Ace reported that Caelynn went over to Europe after Dean’s skiing accident in Switzerland. Later, news emerged that while overseas, the couple held a commitment ceremony. Not married yet, nevertheless, it’s a huge sign the couple remains solid. Very happy fans sent in multitudes of congrats. But more good news came in this week. Recall they fostered an elderly dog? Fans begged the couple to adopt him and now they just did.

We also reported that Pappy grabbed the hearts of fans from the first day Caelynn shared about the dog. They saw him twice at different shelters. Taking it as a sign, they fostered him until a nice home could be found. Sharing pics of the dog, fans immediately agreed he looked just like Yoda. Next, fans saw Pappy out and about in the van having the time of his life. Thousands of BIP fans begged Dean to adopt Pappy. And, he did.

this little dude is the coolest! when we first mentioned we wanted to foster a pup we received so many fantastic recommendations on where to go. the first day we went to the west LA animal shelter and met a lot of amazing dogs but none that would be good for me given the state of my leg. we actually saw pappy there too but couldn’t see him for some unknown reason. the next day we paid a visit to @wagsandwalks and, lo and behold, pappy was there! we took it as a sign and took him home as fast as we could. this is my first time fostering and i already know it’ll be so hard to give him up so, in the meantime, we’re gonna give him all the love we can. if you’re thinking about getting a pup, please consider adopting or fostering. there are so many pups that have so much love to give, all they need is a chance!

Taking to Instagram on Monday evening, Dean shared about Pappy. He’s not the perfect dog, and a while back when they visited Yosemite, Dean mentioned to a fan that Pappy “never listens.” It turns out he’s also got health issues. But in the comments of his recent post, Dean told a fan, “he’s so loyal too. that’s what really sold me on him.” Sharing a photo of himself and Pappy, Dean wrote, “happy bday pappy!”

Dean also noted that “it’s not his actual bday but somehow this little sh*t convinced us to adopt him.” Once again, Dean mentioned they never intended an adoption. But, “damnit he left us no choice,(sic).” Dean mentioned his poor health, writing, ” his old geezer comes with a laundry list of health complications.” They made then decided to “fill his waning years on earth with as much love as we possibly can.” The travel-happy BIP alum also mentioned, “doesn’t hurt that he thrives in the van.”

Absolutely thrilled, Bachelor In Paradise fans rushed to comment on the good news. Here’s what some of them said to Dean and Caelynn:

happy bday pappy! it’s not his actual bday but somehow this little shit convinced us to adopt him. it’s not what we wanted to do when we originally fostered him, but damnit he left us no choice. this old geezer comes with a laundry list of health complications so we decided to fill his waning years on earth with as much love as we possibly can. and it doesn’t hurt that he thrives in the van.

Now, fans ask Dean to set up an Instagram account for Pappy. They hope he calls it “Deanie_PAPPIES !!” What do you think about Pappy the Yoda-like dog winning over Dean Unglert and Caelynn Miller-Keyes? Are you so happy for Pappy? Sound off your thoughts in the comments below.