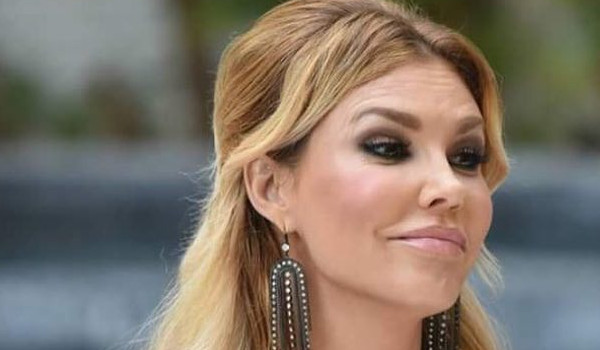 The Real Housewives of Beverly Hills star Brandi Glanville is notoriously outspoken. She often interacts with followers on social media, particularly Twitter. While she live-tweeted the RHOBH Season premiere, she was uncharacteristically quiet after the second episode. Brandi offered a clue on social media on April 25 to explain her silence, Us Weekly reports.

There are a lot of rumors and speculation swirling about an alleged affair between Brandi and co-star Denise Richards. Bravo played up the drama during the Season 10 premiere by breaking the fourth wall and admitting Denise quit filming with the other women.

While Denise has remained mostly mum about the affair allegations, Brandi has been tweeting about it since January. At the beginning of the year, Brandi even offered to take a lie detector test to prove that she was telling the truth.

I am not lying about ANYTHING that I said on housewives and Im willing to take a lie detector test and let’s be clear I was not EVEN the aggressor!!!!

In fact, she alleges that whatever went down between her and Denise was instigated by the Wild Things actress. It appears that Bravo finally had enough of Brandi’s social media commentary about the situation.

As TV Shows Ace reported a few months ago, Denise tired of it long ago. She allegedly sent Brandi a cease and desist letter to stop Brandi from talking about the alleged affair.

Now Brandi says Bravo is silencing her as well. She tweeted late last week that Bravo “asked” her to stop talking about the RHOBH drama on social media.

The tweet was in response to fans wondering why she wasn’t answering their questions. She wrote that Bravo’s request was the “ONLY reason” she wasn’t replying to the haters.

I’ve been asked by @BravoTV to stay off social media talking about housewives… that is the ONLY reason I am not replying to you fucking hater cunts! Cunt wait for open season 💋

Brandi did take the opportunity in the comments to defend herself one last time. She professed, again, that she wasn’t lying.

Denise Responds to Claims That She Ran From Questions

Several of Denise’s RHOBH co-stars have spoken out about her walking out of filming and otherwise avoiding discussing personal issues on camera.

Erika Jayne said that Denise walked out on filming several times, which Bravo seemingly confirmed in the premiere. Kyle Richards also called Denise out for it, TV Shows Ace reports.

Denise clapped back at Teddi Mellencamp about who taught her the “Bravo, Bravo” trick. (According to Kyle and Teddi, footage of any RHOBH star saying “Bravo, Bravo” couldn’t be used. However, Bravo broke the fourth wall themselves and used the footage of Denise saying it.)

After many outlets wrote about Denise “running” from filming, the actress finally responded. She tweeted that she “didn’t run from anything.” However, she does imply the other RHOBH ladies kept “coming at” her during filming, making her feel “on trial.”

Fans will have to tune in to Season 10 of RHOBH to find out how it all plays out.