For years, rumors have been going around about a potential courtship between Jana Duggar and Lawson Bates. Also for years, Jana has repeatedly denied these rumors. Of course, fans of both families are hoping that someday they’ll end up together, but it’s unclear what’s actually going to happen there. Fans are also eager because Jana is now 30 years old and unmarried. Fans have been urging them to date, as reported by TV Shows Ace.

Until recently, the rumors had died down for a bit, which Lawson and Jana likely appreciated. But, they’ve started back up again thanks to a new series of Instagram stories from Carlin Bates. In the videos, it seems that Jana and Johannah are visiting Carlin and Evan Stewart in Nashville, Tennessee. Lawson was previously in Tennessee helping out with relief efforts following the recent tornado. A couple of the Duggar guys went along to help too, but they aren’t pictured in Carlin’s story.

No response comes from Jana or Lawson

At this point, it’s likely that Jana and Lawson won’t respond. They’re probably tired of the rumors that come and go every couple months. Plus, the videos were posted on Carlin’s story, so there’s no place for discussion. There’s no comments section. And, neither Lawson or Jana posted about their meetup.

Is Johannah Duggar there as a chaperone?

Fans do think it’s odd that Johannah would tag along with Jana due to the age gap. Jana is 30 and Johannah is 14. So, it’s not like they’re close in age. They might get along, but Jana is hanging out with other adults.

Fans are thinking that Johannah might’ve gone with Jana so she could be a chaperone. When the Duggar kids are in courtships, they must have a chaperone at all times.

In the videos, Carlin and Evan are hanging out with Lawson and Jana. But, it seems like the family requires a chaperone that’s within the family, making Johannah a real possibility. It’s also worth noting that Lawson is sitting beside Johannah on a couch. Then, Jana is sitting on a separate couch, holding Carlin’s baby, Layla. So, they could’ve intentionally been separated so there’s no chance of PDA. 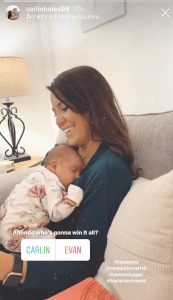 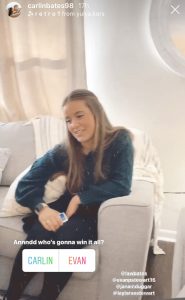 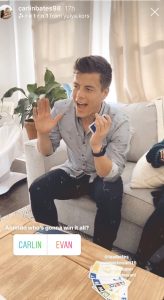 How likely is the Duggar-Bates courtship?

Maybe the group of friends was just hanging out. Duggar fans know that the Bates family has been friends with them for a long time. Several friendships have come up between the two families. So, it wouldn’t necessarily be a shock. But, fans are still hopeful that there’s a courtship in the works.

Plus, during the season finale of Counting On, Jim Bob hinted at something “brewing.” Since he said that, no big news has come out. No one has moved, announced a pregnancy, or revealed that they’re courting. So, whatever’s brewing is still a mystery. Could it be a courtship between Lawson and Jana? Fans sure hope so.

Do you think Jana and Lawson are courting, or do you think they just got together as friends? Share your thoughts below.