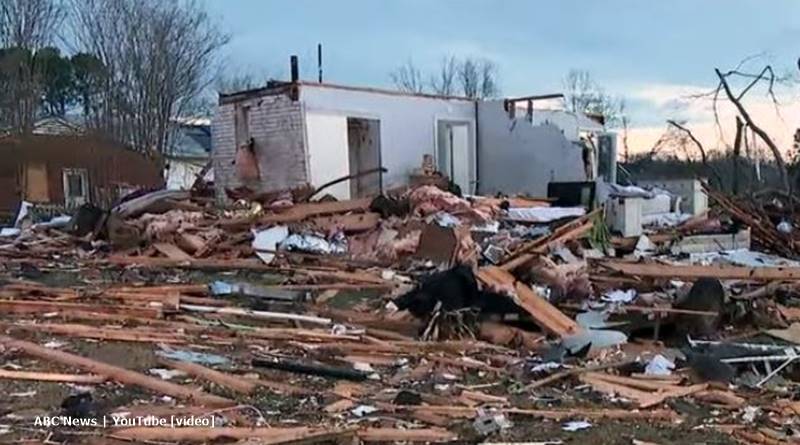 Duggar brothers James and Jason are no strangers to volunteering help in times of disaster. Last year, they went across to the Bahamas after a hurricane devastated the place. Lawson Bates also went along. Now, news came out that Lawson went to Tennessee to help with the tornadoes. And, the Duggar family proudly announced that James and Jason went there as well.

TV Shows Ace reported that Lawson Bates rushed to lend a helping hand in Nashville, Tennessee. We noted that Lawson’s got a close connection to Tennessee as his family lives there. And Carlin, his sister, lives in Nashville. But, it seems she’s okay as no bad news emerged about her and her hubby Evan. The tornadoes touched down earlier this week across several counties in Tennessee. A great deal of damage happened when twisters hit the city of Nashville, in mainly residential areas.

Now the Duggar family announced on Instagram, that just like Lawson, James and Jason also rushed to lend a hand in the aftermath of the destruction. It looks like they caught up with Lawson there. Cheatsheet noted that on Lawson’s Facebook, one picture showed Jason and James in a picture with him. Then official notification of them being there came from the @Duggarfam account.

James and Jason rush to Tennessee

On their Instagram account, the Duggar family shared a photo of the young men using heavy earth-moving equipment. They captioned it with, “Praying for those in central Tennessee who have lost so much this week!! Jason and James are there helping with the cleanup and recovery alongside hundreds of volunteers. Our hearts are with all the families affected by the deadly tornados!! 🙏🏽🧡.” The photo got tagged with Cookeville, Tennessee.

Duggar fans commented on the post. One of them wrote, “Prayers for all those affected in both Tennessee and Missouri. Thank you, Jason and James, for your service to those in need.” Another noted, “Wow that’s terrible 😞 awesome to see the work & dedication you guys have for helping others. God bless your efforts ❤️.” Another grateful fan wrote, “God Bless them for going and may God keep everyone safe and healthy.”

Praying for those in central Tennessee who have lost so much this week!! Jason and James are there helping with the cleanup and recovery alongside hundreds of volunteers. Our hearts are with all the families affected by the deadly tornados!! 🙏🏽🧡

How to help the Tennessee aftermath

The storms killed over two dozen people and caused massive destruction to infrastructure. Unlike Jason and James Duggar, not everyone can fly in and help out. But there are other ways they can do their bit. According to Kiro 7 News, people can donate to the Middle Tennessee Emergency Response Fund.” Alternatively, there’s a Go Fund Me that was set up by “former Olympic gymnast and Nashville resident Shawn Johnson.”

What do you think about Jason and James Duggar rushing to volunteer in Tennessee like their friend Lawson Bates? Sound off your thoughts in the comments below.