On Wednesday, February 12, Tori Roloff made an exciting announcement. The Little People, Big World star revealed when the upcoming season will premiere on TLC!

Fans of the show have been eagerly waiting for an announcement about the premiere date. TV Shows Ace previously reported that both Tori and Amy Roloff shared that it would air in the spring. Plus, it was reported that the show was being filmed. But, they have never mentioned a specific date until now.

On her Instagram stories, Tori shared a photo and said that the show returns on March 31. She reminded her followers to save the date and said, “Mark your calendars!!!” 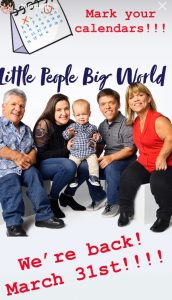 Tori wasn’t the only person to share the big news on social media. TLC also made a special post about the show’s new season. They posted a 3-minute video and shared, “Big changes and new beginnings.
Over the years life has taken the Roloffs in unexpected directions—and with grandchildren, farm renovations, and new romances, no one knows what the future may hold. Follow their next chapter on the season premiere of #LPBW Tuesday, March 31 at 9/8c!”

In response to TLC’s post, lots of fans of the show are leaving comments. Here’s what a few of them had to say:

Over the years life has taken the Roloffs in unexpected directions—and with grandchildren, farm renovations, and new romances, no one knows what the future may hold. Follow their next chapter on the season premiere of #LPBW Tuesday, March 31 at 9/8c!

Who will be on the new season of the show?

Matt and Amy Roloff will be on the upcoming season. In addition, Tori and Zach will be a part of the show. The couple has two kids now. Jackson is two years old and Lilah is almost three months old.

Jacob, Jeremy, and Molly, Matt and Amy’s other kids, are no longer on the show. Still, there is plenty to see with Matt, Amy, Tori, Zach, and the kids.

The new season has a lot to cover, which is exciting for fans of the show. Fans know that Amy recently got engaged and also left the farm to move into a home of her own. Plus, Tori and Zach just welcomed their baby girl a couple months ago. It’s unclear whether Lilah will be on the show this season due to filming and production time.

So, are you looking forward to the new season of Little People, Big World? What are you expecting in the new season? Leave a comment below.

Don’t miss the premiere on TLC on March 31.