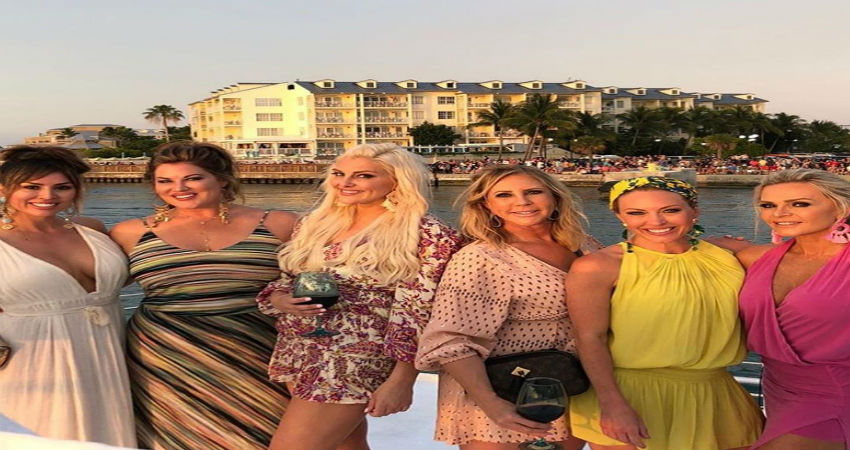 Before another decade ends, TV Shows Ace pays tribute to the top 10 shocking moments from the various franchises.

The most iconic moment of any Real Housewives is, of course, Teresa Giudice’s table-flip. Unfortunately, that happened in 2009, making it ineligible for this list of the 2010s. However, Teresa isn’t the only Garden State resident with a temper.

During Season 2, Danielle Staub clashed with Jacqueline Laurita’s daughter, Ashlee Holmes. Things came to a head, so to speak, when Ashlee chased Danielle backstage at the Posche fashion show.

A scuffle between the two resulted in Ashlee pulling a chunk of Danielle’s hair extension out. Danielle pursued charges against the 19-year-old. Ultimately, Ashlee was found guilty of simple assault and had to pay a fine.

The Real Housewives of Beverly Hills reintroduced us to child actresses Kyle and Kim Richards. The two constantly argued and butt heads during Season 1.

A particularly brutal argument between the sisters took place in a limo at the end of the season. At one point, Kyle screams that Kim is a liar and an alcoholic.

Kim’s drinking problem would become a frequent topic in the seasons following. She has been sober since 2017 after a stint in rehab.

More Than 30 Real Housewives Couples Split Up in Ten Years

The Real Housewives franchise is deadly to marriages and relationships. Us Weekly tallies 34 romance casualties between 2010 and 2019. Some of the splits were more surprising than others.

The break ups that caught viewers off-guard include Mario and Romona Singer from RHONY. Jim Edmonds abruptly filed for divorce from former RHOC star Meghan King Edmonds after a sexting scandal. More recently and not really surprising, Teresa and Joe Giudice separated after 20 years of marriage.

The good news is that Lisa Vanderpump and Ken Todd are still going strong.

Chef Bethenny Frankel was one of the original stars of The Real Housewives of New York. The opinionated New Yorker briefly left the show at the start of 2010 but returned in time for Season 7.

During her time away, Bethenny got married, had a baby and got divorced.

In August, Bethenny revealed that she was leaving RHONY again to focus on other things. TV Shows Ace reports the reality star has new shows in development with mega-producer Mark Burnett.

Teresa and Joe Giudice have appeared on The Real Housewives of New Jersey since the show’s inception in 2009. She may be notorious for table-flipping in the last decade, but both are notorious for prison terms this decade.

In 2014, the couple were charged with federal charges of tax evasion and other crimes. They ultimately took a plea deal to have some control over their sentences.

Teresa served almost a year in prison in 2015. When she was released, Joe began serving his 41-month sentence.

Unfortunately, their legal problems didn’t end there. When Joe was released from prison, he was sent directly to an ICE facility to await a ruling on his deportation case. (While Teresa and their four children are U.S. citizens, Joe never applied for citizenship.)

Joe chose to seek a release from ICE custody and return to Italy while awaiting appeal. Earlier this month, reports surfaced that the high school sweethearts are separating after 20 years of marriage.

RHONY’s Aviva Drescher Gets a Leg Up

During Season 6 of The Real Housewives of New York, Aviva Drescher had disagreements with the other women. Fed up with their constant bullying, Aviva channels her inner Teresa Giudice.

Instead of flipping a table, Aviva slammed her prosthetic onto the table after shouting, “The only thing fake about me is THIS!”

She wasn’t asked to return for Season 7.

The Real Housewives of Beverly Hills’ close proximity to Hollywood results in several of the women in the cast having acting careers.

Days of Our Lives stars Lisa Rinna and Eileen Davidson joined the show full-time for Season 5. Lisa R. appeared throughout Season 4 in a part-time capacity.

Former model Brandi Glanville clashed with Lisa R. and Eileen throughout the season. During a Girls’ Night outing, Brandi tries to get Eileen to act out a scene from the soap opera. When Eileen refuses, Brandi tosses a glass of white wine in the actress’s face.

Later on in the season, Brandi playfully slapped Lisa Vanderpump across the face.

Needless to say, Brandi did not return for Season 7.

In 2010, the OG of the OC, Vicki Gunvalson, began dating a man named Brooks Ayers. Vicki’s daughter and co-stars didn’t like Brooks and thought he was trouble. However, Vicki ignored their warnings and the relationship continued for five years.

Season 10 of RHOC was dominated by the allegations that Brooks was lying about his cancer diagnosis.

In 2015, Brooks admitted to creating fake documentation meant to prove that he was sick.

While he claims Vicki didn’t know about the scheme, her castmates believe otherwise.

In other news, after 13 seasons on the show, Vicki was demoted to a “friend of” role for Season 14. It remains to be seen if she’ll return for Season 15 and in what capacity.

In 2017, the former Countess Luanna de Lesseps was arrested for public intoxication. The original RHONY star went to rehab to avoid jail time.

However, she has continued to openly struggle with her addiction on the show. Luanne has been in and out of rehab, with the most recent stint in 2019.

The biggest casting shakeup of any Real Housewives franchise came during Season 9 of The Real Housewives of Beverly Hills. Lisa Vanderpump’s friendships with the other women suffered a falling out over Puppygate.

In short, Dorit Kemsley adopted a dog from Lisa Vanderpump’s dog rescue only for the dog to end up in a shelter months later. The real issue is that someone in the cast leaked a damaging story about the situation to the tabloids.

Lisa Rinna helped convince the other women that Lisa V. was behind the leak. When Kyle Richards confronted her friend at her home. Lisa V. denied the allegations. Her husband, Ken Todd, shouted “Goodbye, Kyle” repeatedly until Kyle left the house.

As a result of the falling out, Lisa V. refused to film with the other women or appear at the reunion episode. Shortly after the reunion aired, Lisa V. revealed she wouldn’t be returning for Season 10.

In November, Bravo announced a new city is coming to the franchise. The Real Housewives of Salt Lake City will premiere sometime in 2020.